What should be inside a NOAA Divemaster Kit?

The NOAA Diving Program requires that Diving Units keep the following items in their Divemaster Kits: (Divers should also complement these with items that are useful to the...

The NOAA Office of Marine and Aviation Operations’ fleet of research and survey ships comprise the largest such fleet of federal ships in the nation. The data they gather is vital to fisheries management, nautical charting, and ocean and climate studies, to name a few. However, the vessels’ gears, both mechanical and scientific, don’t turn without a highly trained and skilled crew.

One of the “driving forces” on any ship is the chief boatswain (pronounced “bosun”). That’s certainly true of Leslie Allen, chief boatswain aboard NOAA Ship Fairweather, one of the agency’s four hydrographic survey vessels.

“As the chief boatswain aboard the Fairweather, I manage the deck department, which consists of 12 personnel,” says Leslie. This position and department are essential to the safe and effective operation of NOAA ships. Staffed by civilian wage mariners, the Fairweather’s deck department oversees the function and maintenance of ship’s deck machinery (cranes, davits, anchor windlass, etc.), four hydrographic survey launches, and the three other small boats that assist with data collection. Leslie is charged with the duty of ensuring their safe operation by the crew. 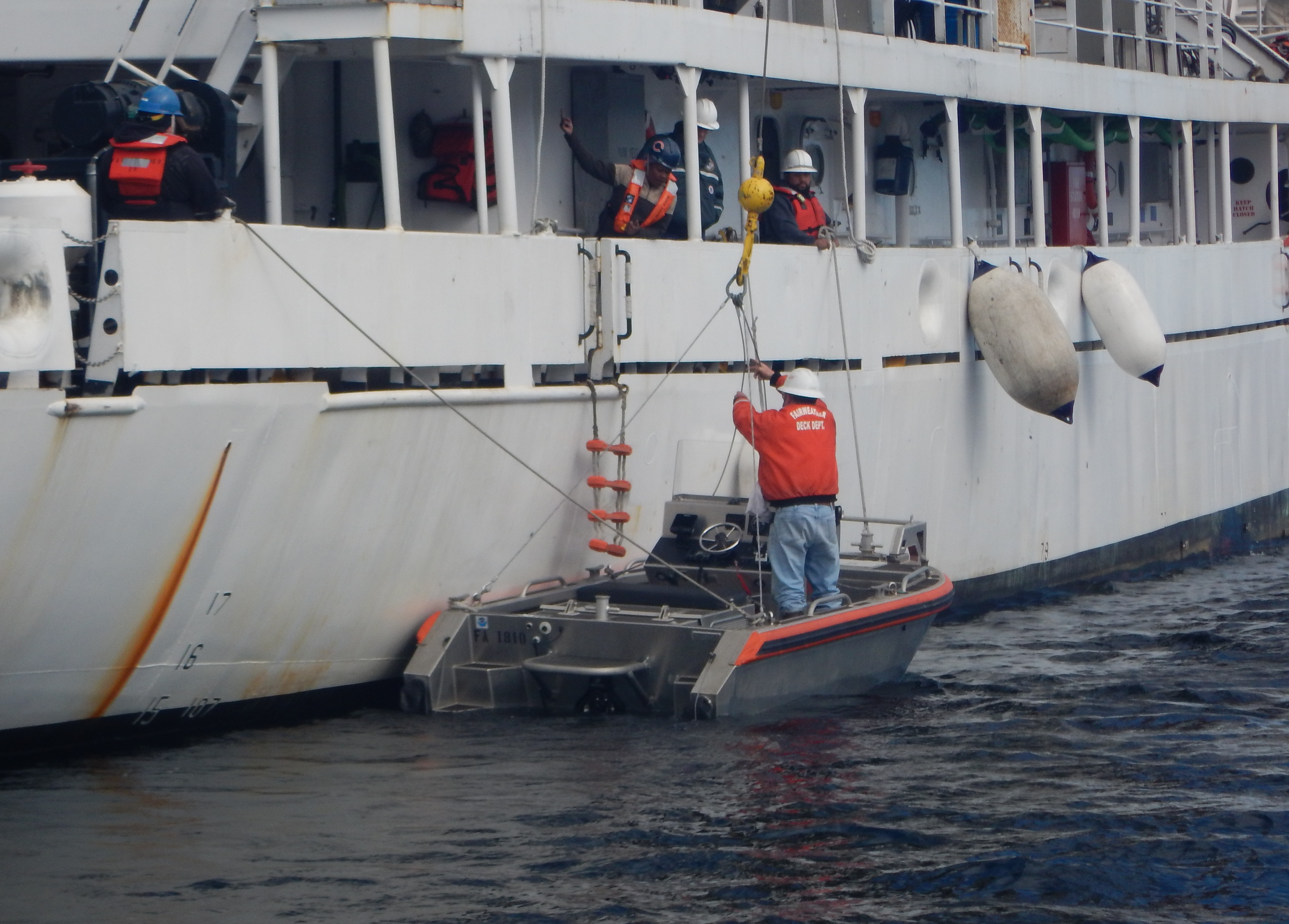 “I am responsible for training current and new crew members in the safe deployment and recovering of survey launches and other scientific equipment, as well as safe line handling and mooring practices,” she says.

Managing the day-to-day operation of a NOAA ship involves weathering the elements in the variety of the environments where missions are conducted, as well as overcoming other challenges that arise.

“While on the Fairweather, I have worked as far north as the Arctic Ocean and on other NOAA ships as far south as the Strait of Magellan,” says Leslie. “Some of the areas we survey haven’t been surveyed in decades and often the last known survey was done the old school way, with a lead line on a string, so they are not very accurate.”

Working on the water, coupled with the unique arrangement of living at sea for six to seven months each year, presents a variety of challenges. The key to overcoming these challenges is training and there truly is no teacher like experience, of which Leslie Allen happens to have 20 years’ worth in the maritime world. She cites her time on rigged sailing vessel as her greatest teacher of seamanship.

“I have also been trained in advanced firefighting and lifesaving techniques,” says Leslie. “I have been recognized by the United States Coast Guard as a certified medical person in charge.” To prepare the rest of the crew for emergency situations weekly drills are conducted on fire, man overboard and abandon ship scenarios. 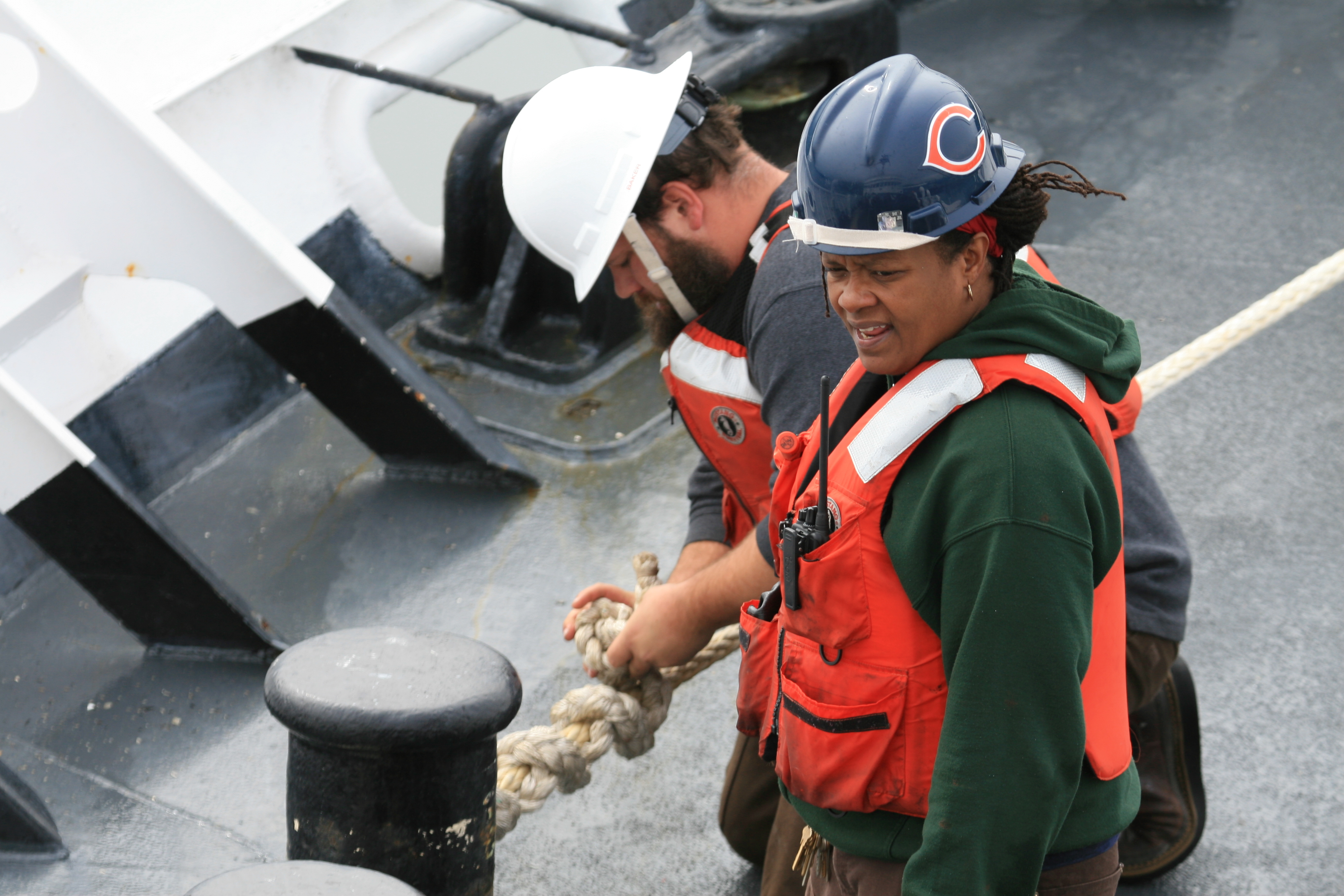 For many, working in a dynamic environment like this could be nerve-racking, but Leslie is always up for the challenge.

“We have encountered heavy seas, outrun hurricanes and dodged ice floes, but I wouldn’t trade it for anything,” she says. “As the saying goes, ‘Smooth seas never made a great sailor.’”

While this line of work comes with inherent risks, the constant threat for hazard, it also comes with high reward. Some of Leslie’s fondest memories at sea were made in 2010 during a hydrographic survey mission in Alaska’s Glacier Bay National Park.

“It was serene, beautiful and I felt extremely blessed to be given the opportunity to do that. Bears were spotted along shore as they scrounged around for the last bit of food before hibernation, glaciers were calving, and whales were everywhere,” says Leslie.

If given a time machine to roll back the years for a do-over, Leslie wouldn’t even entertain the idea.

“Working for the National Oceanic and Atmospheric Administration has afforded me the opportunity to travel, explore, meet new people, foster great relationships and develop as a mariner and a person,” she explains. To lead a fulfilling career while also making a difference is a dream to most and Leslie had made it her reality.

Leslie set on this path 10 years ago, reaching for a goal and today she holds it in the palm of her hand.

“My main motivation was to become the first permanent female boatswain in the history of NOAA,” exclaims Leslie. Her hard work has earned her the title chief boatswain. “Nope, I wouldn’t change one thing!”

You are here: https://www.omao.noaa.gov/find/media/articles/2016-06-15/meet-crew-chief-boatswain-leslie-allen-noaa-ship-fairweather
Reviewed: October 1, 2016. Contact us with page issues.