A NOAA Diver photographs a school of hammerhead sharks near Jarvis Island, in the South Pacific Ocean, during a research expedition on the NOAA Ship Oscar Elton Sette.

Meet NOAA Diver Paula Ayotte, a veteran fish and benthic survey diver, from the Pacific Island Fisheries Science Center – Coral Reef Ecosystem Program (CREP) located in Honolulu, Hawaii. In this article written especially for Shark Week, she gives us a personal account of an exhilarating dive near Jarvis Island during the recent reef fish surveys she and her CREP team conducted on the NOAA Ship Oscar Elton Sette in May 2016.

As I was beginning my fish counts from the center of my 15m-diameter survey area on the northeast corner of Jarvis, I turned and saw a 7.25’ scalloped hammerhead shark (Sphyrna lewini) swimming towards me. As I frantically pushed the ON button on my camera, it saw that I was looking at it and it slowly turned away as I took a picture. This was the first time in the 10 years I’ve been doing fish surveys that I’ve ever had a hammerhead come into my survey transect to be counted.

On the west side of Jarvis just off the reef, multiple teams had done dives deploying and retrieving water collection and temperature/salinity measuring instruments as well as surveying corals and fish. Several divers had mentioned seeing a large school of hammerhead sharks in the area, so after completing our surveys in that area we kept on the lookout in hopes of finding the school. 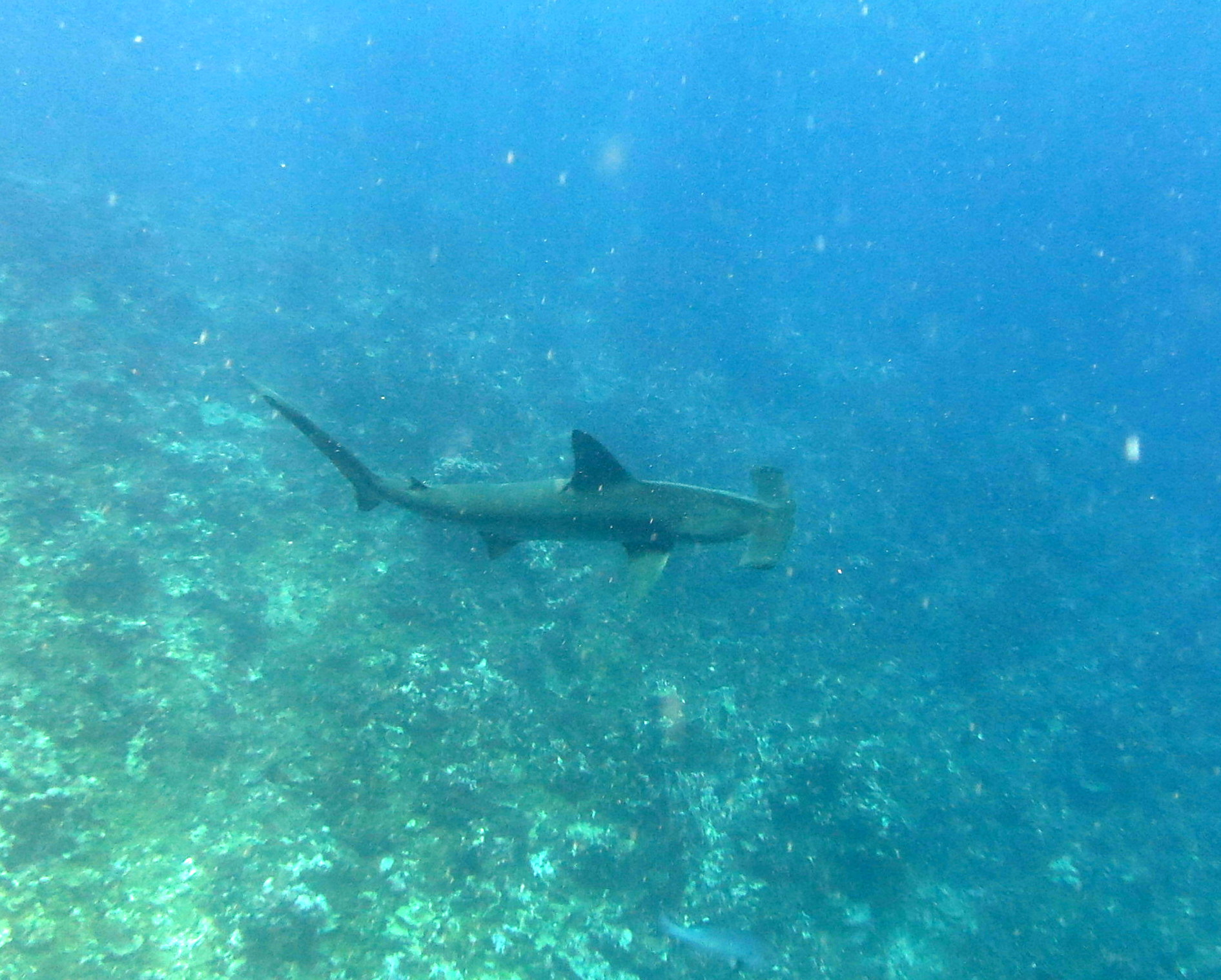 "As we stared into the blue, a single hammerhead swam towards us, and then leisurely circled us before swimming off." This shark was photographed by a NOAA Diver near Jarvis Island in the South Pacific Ocean.

As we stared into the blue, a single hammerhead swam towards us, and then leisurely circled us before swimming off. We were excited to see it, but were still waiting expectantly for the large school we had heard about. After several minutes, three hammerheads cruised by, checking us out. This was more like it. We swam slightly farther from the reef (as we normally do at the end of a dive to allow us to be picked up in deeper water) and after several minutes we saw them. The school. Swimming just below us in about 60 feet of water, a procession of hammerhead sharks.  I was torn between continuing to capture this amazing spectacle on my camera and just being in the moment, and after a few seconds stopped taking pictures and just experienced being in the water with these breathtaking animals.

When the school passed we stared at each other, astounded by what we had just seen.  I pumped my fists and did a happy dance underwater. “Do it again! Do it again!” For a couple of minutes we hovered in the water column absorbed in our own thoughts, me thinking that it just doesn’t get any better than this. And then it did. The school returned, and suddenly we were in the midst of these gentle giants, some of them almost close enough to touch.  There were at least 100 sharks, and though I know they were aware of the three of us, they seemed totally unperturbed, dignified even, as they swam serenely by. 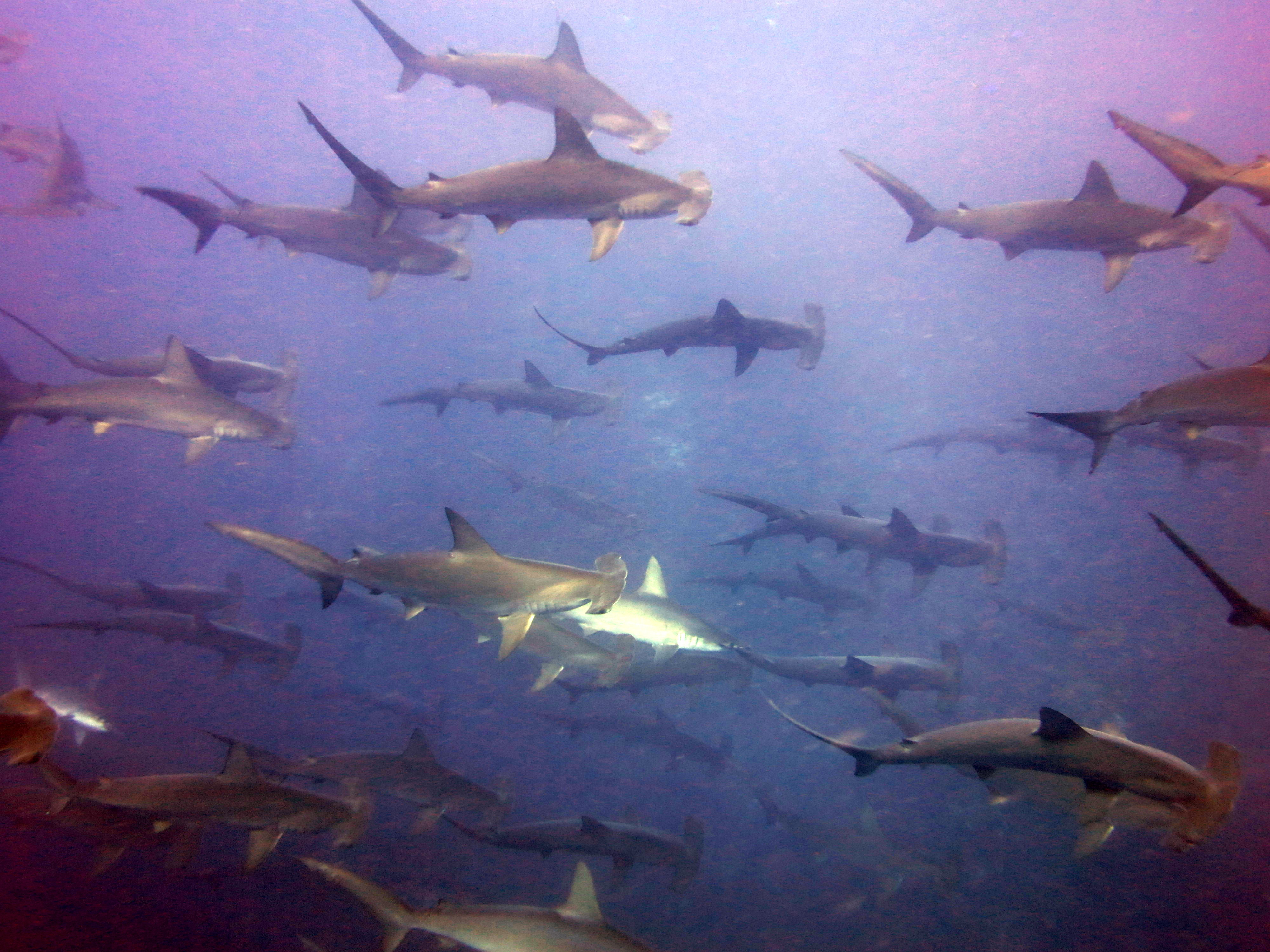 A school of hammerhead sharks photographed by a NOAA Diver near Jarvis Island.

What makes Jarvis special is its remote location and that it is in the path of the easterly flowing Equatorial Undercurrent which brings nutrient-rich waters upward, enriching the primary productivity of the surface waters. This means lots of fish and top predators such as sharks, which are a sign of a healthy ecosystem. This is why it’s one of my favorite places to be in the water and this year I added to that once-in-a-lifetime experience diving with a giant school of hammerheads.

Paula Ayotte serves as a Rapid Ecological Assessment (REA) fish team lead and survey diver during Pacific Rapid Assessment and Monitoring Program (RAMP) cruises, gathering data to characterize fish populations and benthic composition. Paula graduated with a BA in Marine Science and a minor in Biology from the University of Hawaii at Hilo and has participated on more than 45 RAMP cruises encompassing almost 50 islands throughout the Pacific, including the main Hawaiian Islands, the Northwest Hawaiian Islands (Papahānaumokuākea Marine National Monument (PMNM)), the Marianas archipelago, East Timor, the Phoenix Islands, American Samoa, and the Line Islands. She has also led the development of fish survey and fish identifications methods training materials and authored a formal Standard Operating Procedures manual, and has trained not only CREP fish survey divers, but divers from the University of Hawaii, Guam NMFS Pacific Islands Regional Office, the Nature Conservancy, Bigelow Marine Labs, American Samoa Department of Marine and Wildlife Resources, PMNM, and the Southeast Fisheries Science Center. 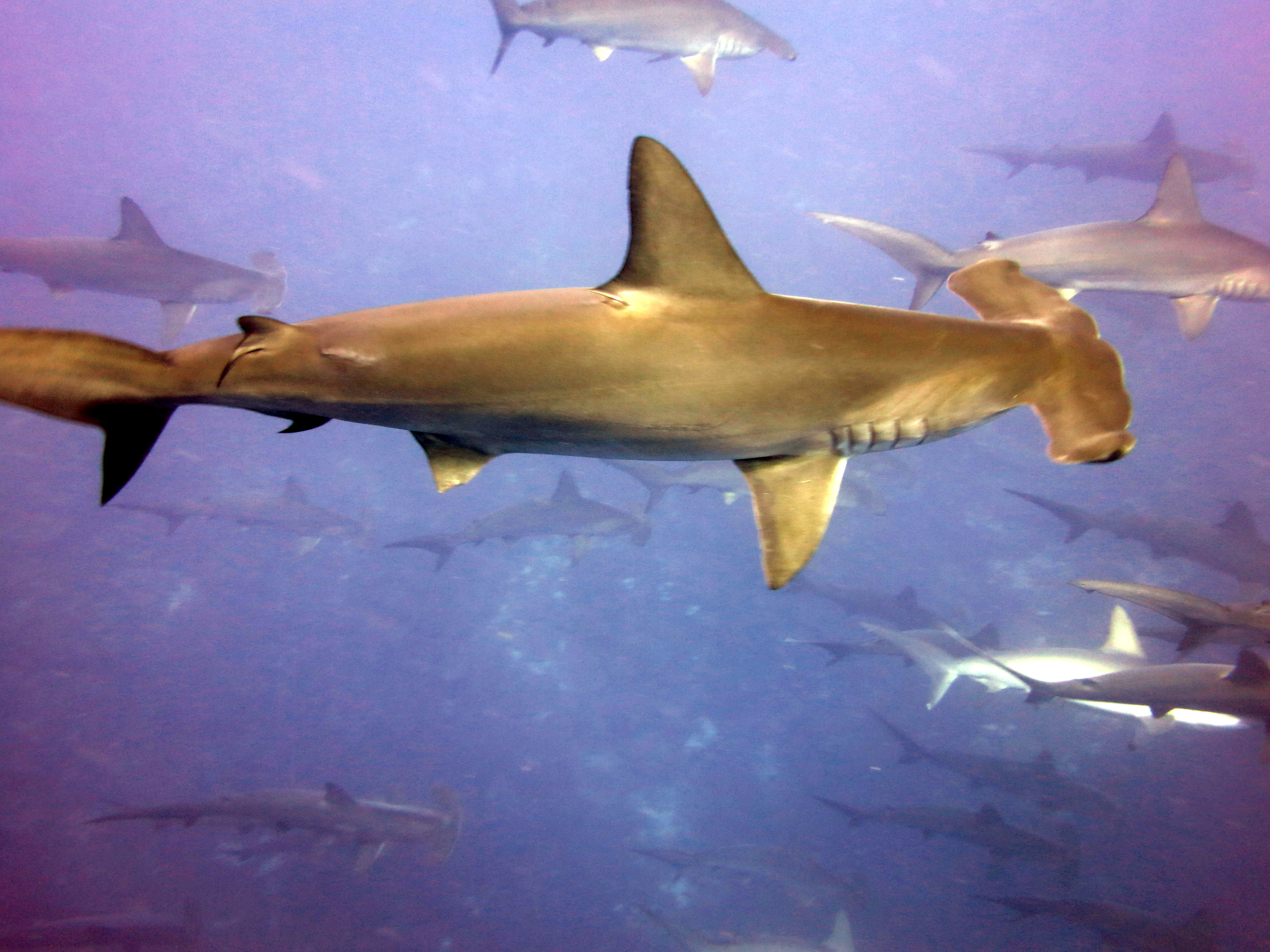 A hammerhead shark swims with a school. About 100 hammerhead sharks were estimated by divers at this location near Jarvis Island during a research expedition on the NOAA Ship Oscar Elton Sette.