Who are NOAA Divers? Meet NOAA Diver ENS Phil Manougian, a NOAA Corps Officer currently serving on the NOAA Ship Bell M. Shimada. In this article, he gives us a look at how he and some fellow officers have decided to use their NOAA Diving skills off the clock to give back to their community and increase their proficiency levels.

ENS Niki Norton, LT Zach Cress, LCDR Sarah Duncan and I first became involved in working with the Oregon Coast Aquarium (OCAq) by hearing about the opportunity from other NOAA Corps officers who have dived in the exhibits in previous years. Because our ship, the Bell M. Shimada, has its home port in Newport, Oregon, it seemed like an excellent combination of diving, staying current, volunteering in the community, and having a LOT of fun in the water.

We dive in three of their exhibits: Orford Reef, Halibut Flats, and Open Sea (sharks!). Every exhibit is 26 feet deep, with Open Sea being the largest by volume, and Orford Reef the smallest. Orford Reef is a condensed mockup of an actual reef off of Point Blanco, Oregon. Plenty of fishes to see including rockfish of all kinds, and a wolf eel that requires hand feeding (one nasty bite if you are not careful...). The Halibut Flats exhibit has about ten 3-foot long halibut along with 4 white sturgeon (similar to those that can be found in the Columbia River). We have hand fed these in the past because they're not quick enough nor sharp sighted enough to see and eat their food before a halibut or rockfish takes it from them. They mostly just "gum" the food out of your hands, usually along with 2 or 3 fingers as well until they realize their mistake and spit your hand out. 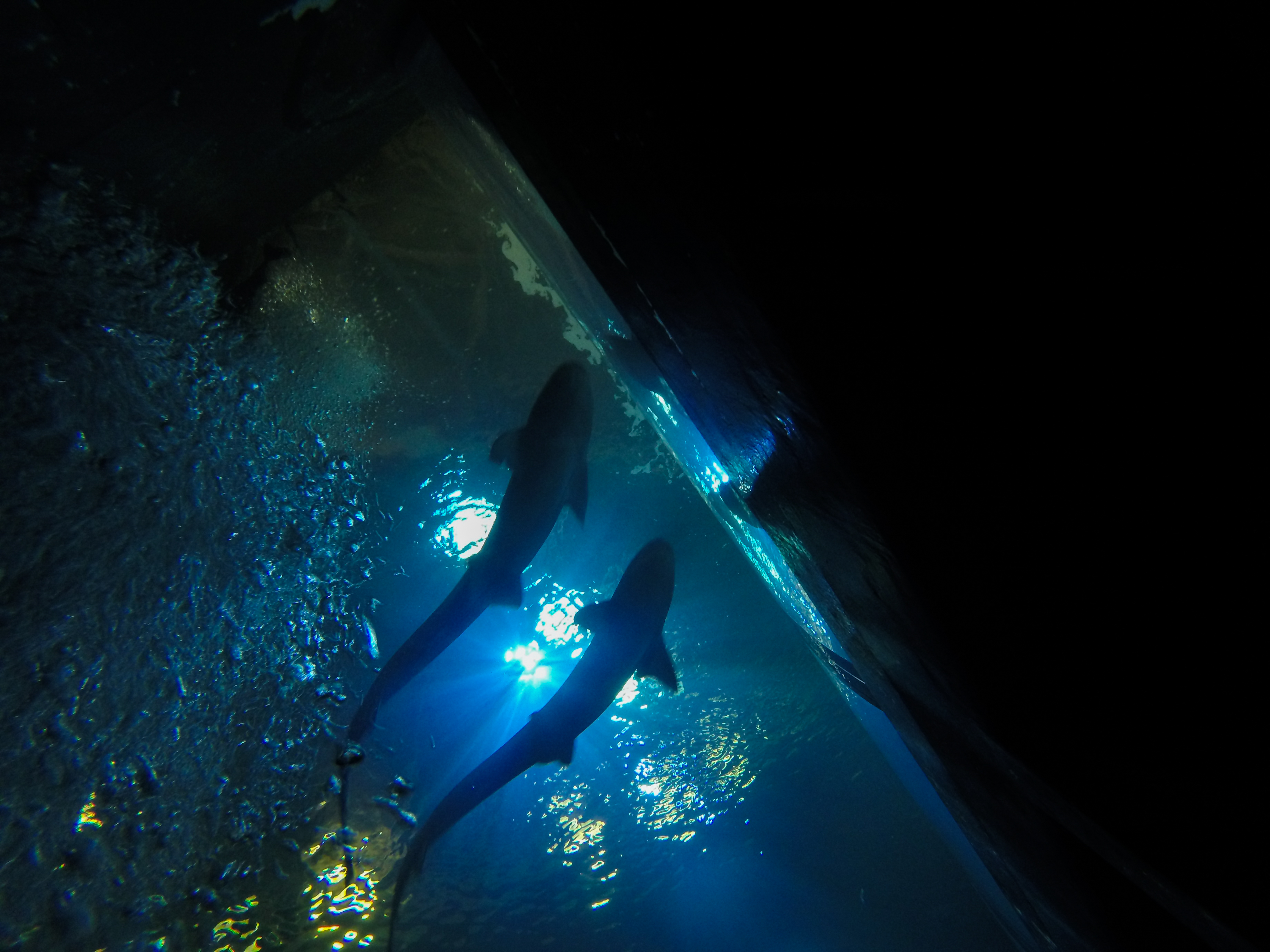 Sharks in the Oregon Coast Aquarium Open Sea exhibit, where NOAA Corps Officers who have trained as NOAA Divers volunteer.

There are quite a few sharks of all kinds in the Open Sea exhibit. Nine of them are broadnose sevengill sharks, one of which is the oldest living Sevengill shark in captivity - a 13-foot long female who doesn't put up with feisty males, which might be the main reason she has lived so long. The OCAq heavily relies on its fleet of volunteer divers to maintain a level of working cleanliness in the aquarium. Five days of the week are filled from 8am to 3pm with volunteer divers in the water.

Anyone with appropriate certifications and dive experience can participate, but being with the NOAA Diving Program allows us to seamlessly transition into a working diver role with the aquarium, only requiring a 4-hour introductory course (mostly consisting of a rules and procedures overview, and two checkout dives in the exhibits).

We mostly clean the acrylic tunnels and vacuum the edges of the exhibits and between the rocks. Occasionally we get special projects like moving around special objects and live rocks with anemones, hand feeding white sturgeon, and any other unusual underwater exercises that will improve the look and cleanliness of the exhibits.

We usually attend a day of diving at least once a month (sometimes twice a month) while the ship is in port. It is challenging because of the amount of work to complete in a short amount of time, often diving with two other divers and setting a game plan of who will clean what and when. Buoyancy is a major skill I've honed in these exhibits - needing to keep within 1 foot of your desired depth while cleaning horizontal lines along the acrylic tunnel, careful not to let ANYTHING touch the surface of the acrylic. I mean absolutely nothing. It scratches so easily. I will sometimes move the bubble of air in my dry-suit to my feet while cleaning the top of the acrylic to stay upside down for better leverage, it's much easier that way. We learn to control our breathing or risk having to call the dive too early from quick air consumption (if one person calls the dive, the dive buddy must follow suit).

Skills in the shark exhibit are interesting - always have your head on a swivel and watch the gestured orders from the safety diver - a diver with a black and white striped pole that signals the divers’ position to the sevengill sharks so they can adjust their swimming patterns. Normal work is an excellent way to keep sharp on skills, every dive ends up being a small portion of a checkout dive simply because the skills required to complete the tasks are similar to those we practiced at the NOAA Diver school. From getting kelp tangled on a regulator and having to remove the regulator and replace it, controlling buoyancy, and navigating effectively with equipment in constricted areas. The Orford Reef has plenty of places that are a tight squeeze with a scuba rig on. The people who work at the aquarium full-time are excellent people, so are the volunteers. Everyone is happy to be there and fortunate to be involved in such an exciting operation.

My favorite part of diving at the OCAq, other than the amazing experiences, is watching kids filter through the tunnels as we are cleaning. Their parents point us out and the kids absolutely love it. We wave at them, sometimes write them notes on a tablet we bring with us, and occasionally stick our tongues out at them. Always a hit. Many of the people I work with in NOAA have made their way to this job because a long time ago they visited an aquarium or saw photographs of divers and snorkelers alongside dolphins and fish and coral that makes them realize really awesome opportunities are out there and I can do them too. I feel like every once in a while a kid that stops and watches us work alongside the fish and sharks will feel the same reaction. They also see that sharks aren't the deadliest creatures on earth and the fish aren't some alien creature only seen on TV - we swim alongside them. I'm glad to help be a part of making that a reality for people. 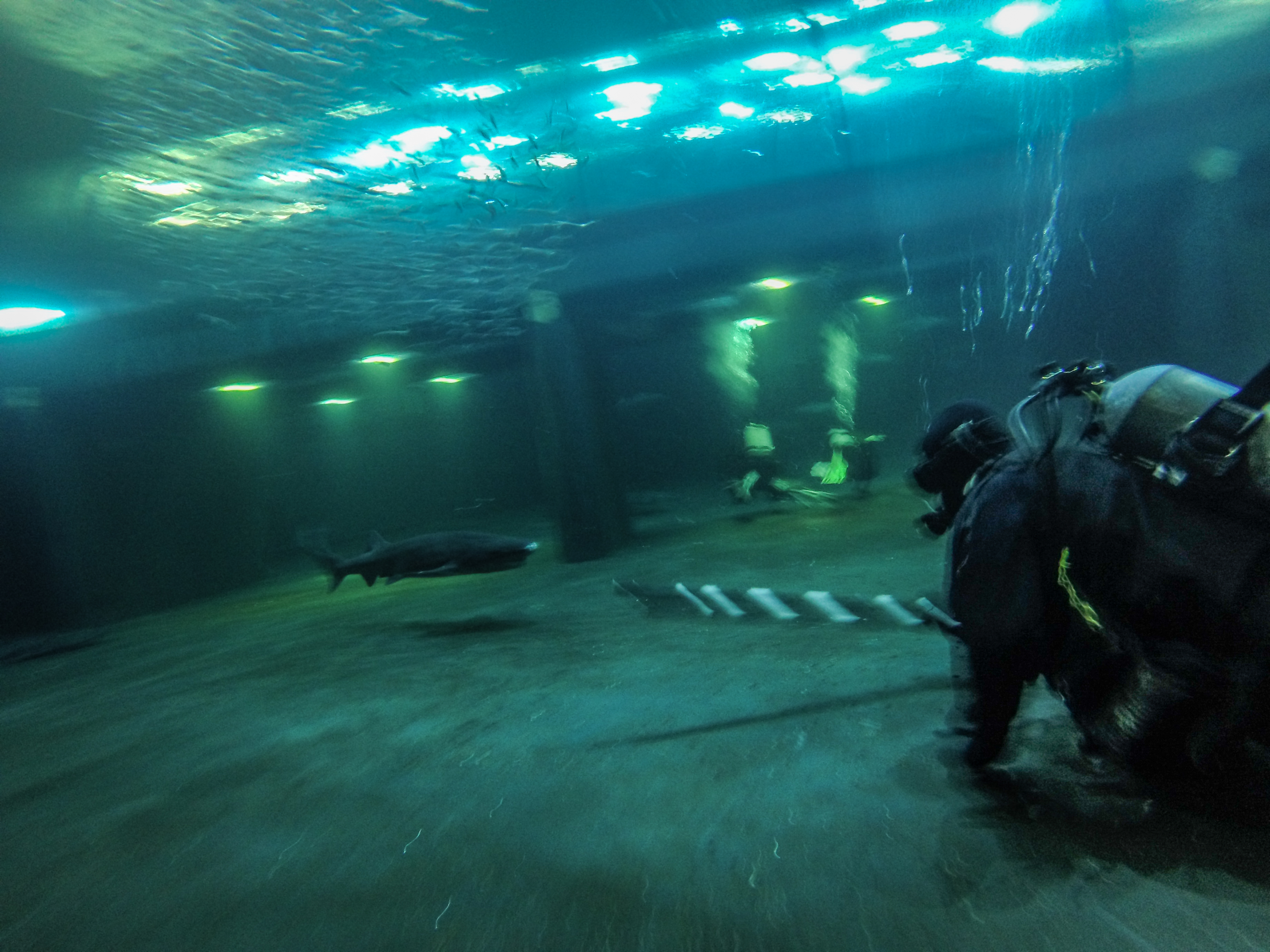