What are Dive Orders?

In order for a NOAA Corps Officer to become authorized to dive, the officer must first receive Officer Diving Authorization or "Dive Orders." The authorization is official...

Dr. Morgan Wells, a pioneer in the diving world and founding director of the NOAA Diving Program, passed away on July 28, 2017. He will be remembered fondly by his colleagues at NOAA and in the diving community. 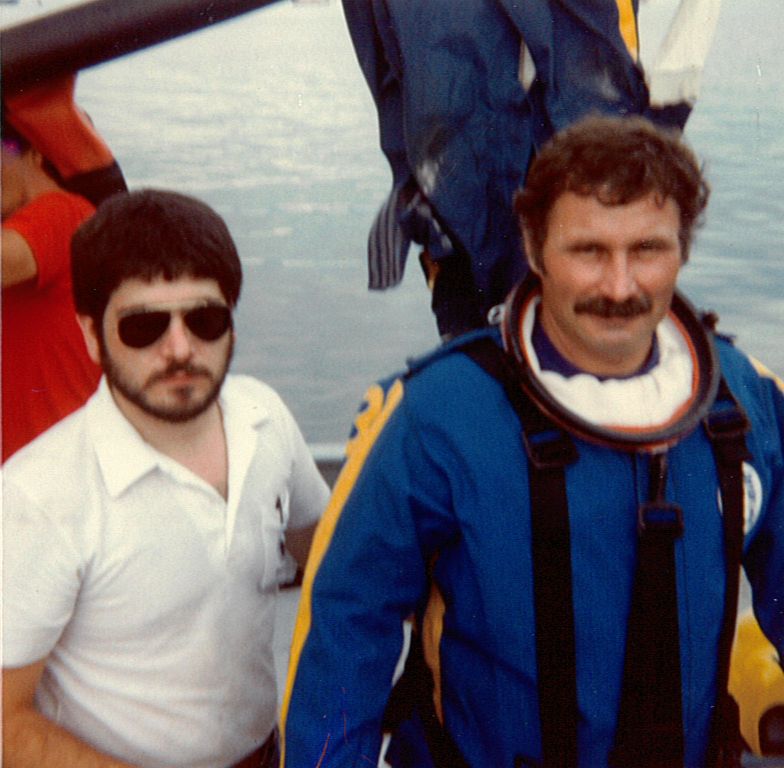 Dr. Wells was best known for developing the NOAA Nitrox I (32% O2/N2) and II (36% O2/N2) mixtures and their respective decompression tables in the late 1970s. Thanks to his research and testing efforts, these mixtures are now widely used in the scientific and recreational diving communities. He later developed NOAA Trimix I, a mixture of oxygen, helium, and nitrogen used in deep diving. Aside from his breakthroughs in breathing gas mixtures, he was also known for conducting research in undersea habitats, where people, known as aquanauts, can live for extended periods of time. Dr. Wells has been credited with having spent more time living on the ocean floor as an aquanaut, and having lived in more habitats than any diver on the planet.

Although Dr. Wells was employed by the National Oceanic and Atmospheric Administration (NOAA) from 1972 until his retirement in 1995 and produced some of his most significant discoveries and accomplishments while working at NOAA, his love for diving and passion for the physics and mechanics of diving were evident very early in his life. He began diving at the age of 14, after making his own surface-supplied diving system out of a paint sprayer and a motor-scooter engine. A year later, Wells built an oxygen rebreather from surplus aircraft respirator parts by looking at diagrams in the U.S. Navy Diving Manual. He used that unit for several years to dive in the ocean, rivers, lakes and under the ice. By 17, he was writing letters to the Navy to alert them of technical errors in the Navy Diving Manual. When compressed air became available in his area, he switched to open circuit air diving and earned money teaching SCUBA diving while in college. 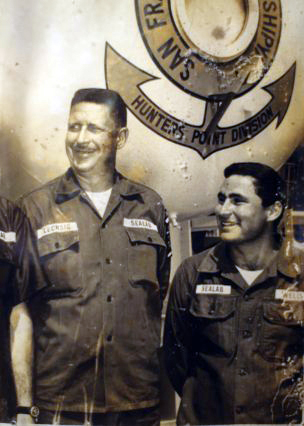 Dr. Morgan Wells (right) during his years at Sealab.

He received scientific diving training at Scripps Institution of Oceanography (University of California) in 1962 while receiving his Ph.D. in physiology. In 1965 he was accepted as a U.S. Navy Sealab Aquanaut for their “Man in the Sea” project and later received mixed gas and rebreather training at the US Navy Mine Defense Lab in Panama City, Florida. Later that year, he served as a Sealab II Aquanaut during a 15-day, 205 foot helium/oxygen saturation dive, beginning a 30-year career in undersea habitat diving. In addition to Sealab, he also dove inside TEKTITE, EDALHAB, HYDROLAB, PRINUL, HELGOLAND (Germany), and LORA (Canadian, under ice). Dr. Wells also served as operations director for special missions of HYDROLAB and HELGOLAND (in U.S. waters).

Dr. Wells began working at NOAA soon after NOAA was established in 1970. Starting in 1971, NOAA Diving was overseen by the Manned Undersea Science and Technology Office, where Dr. Wells served as science coordinator from 1972 until 1975. His duties included coordinating and conducting undersea research with scientists from around the globe. In 1975 he was appointed NOAA Diving Coordinator, where he was responsible for all aspects of NOAA’s diving training, safety, and effectiveness.

When the NOAA Diving Program was created in 1978, he was appointed director, maintaining his duties as NOAA Diving Coordinator and assuming the administrative duties of the Director. In 1989 Dr. Wells achieved his career-long ambition of creating the NOAA Experimental Diving Unit (EDU). He happily left the Washington, DC area for the new NOAA EDU, which was housed at the U.S. Army Diving Detachment at Fort Eustis, VA.

Dr. Wells’ early research interests were centered on the respiration of marine organisms as related to temperature and oxygen concentration. He used undersea habitats and diving frequently for studies of symbiotic systems of algae and invertebrates (corals, giant clams, sea anemones). His Ph.D. dissertation research was on the effects of pressure on human hemoglobin oxygen binding properties. He then studied the effects of elevated nitrogen pressure on the oxygen binding properties of hemoglobin of humans and deep diving seals, which eventually led him to the development of Nitrox and Trimix breathing mixtures that benefited all divers. 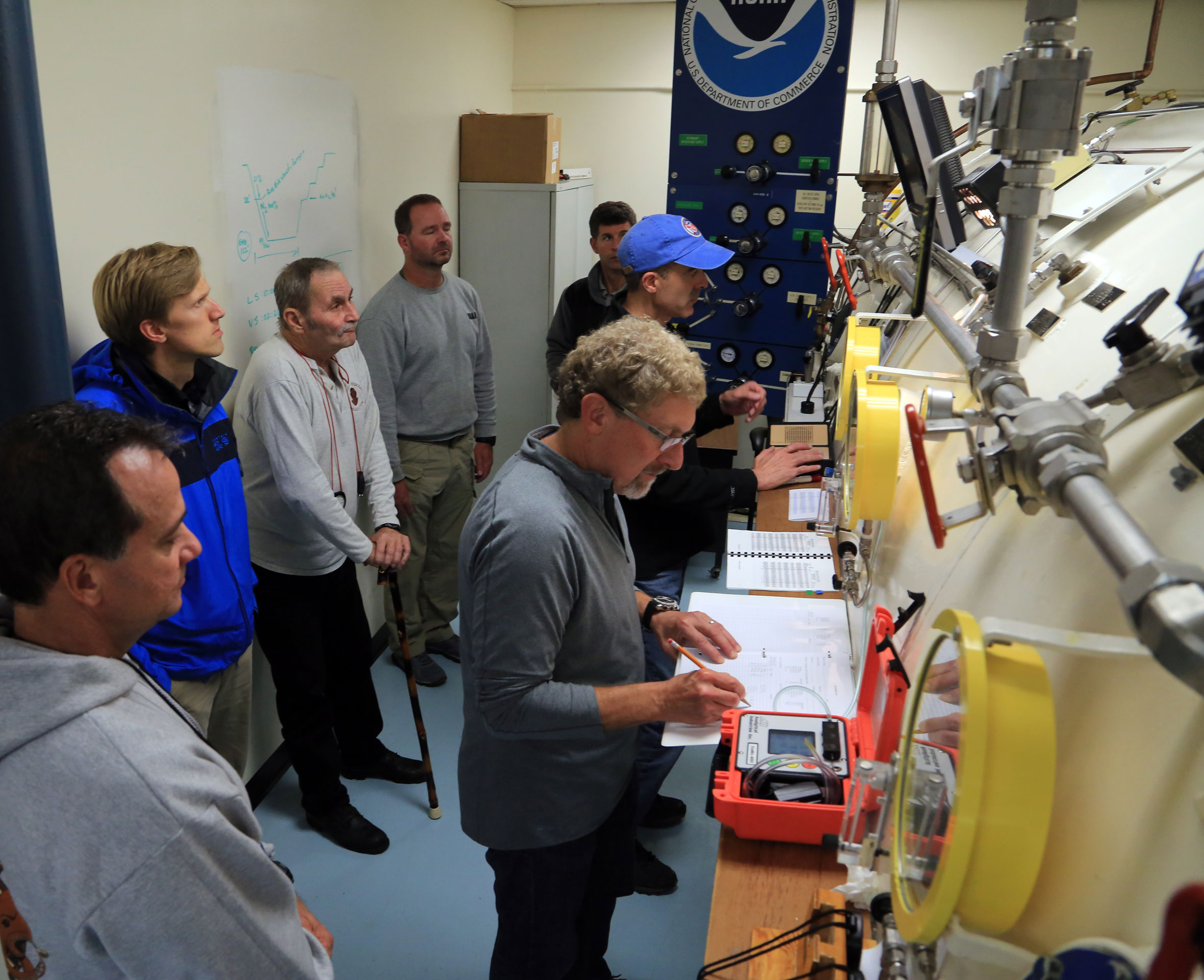 Dr. Wells was also responsible for starting the diving medical curriculum at NOAA, having organized and taught (for 20 years) a Diver Medical Technician (DMT) course. In the late 1970s he also designed a training program with the Undersea and Hyperbaric Medical Society (UHMS) for physicians in diving and hyperbaric medicine. The NOAA/UHMS Physicians Training in Diving Medicine is the only course of its kind taught in the United States and is the most widely respected civilian program of its nature in the country to this day.

Ever active, he continued to teach a class in the Physicians Training in Diving Medicine course alongside other respected medical professionals in the field, lecturing on undersea habitats and nitrogen breathing mixtures. He taught his last class for the NOAA/UHMS course on October of 2016.

His many contributions and his ever inquiring mind will continue to inspire and benefit the progress of diving physiology, the pursuit of scientific research underwater, and the diving community at large.