What is over bottom diving?

Over bottom diving occurs when a diver is able to see the sea floor or bottom but it is too deep to be accessed.

The NOAA Diving Control and Safety Board (NDCSB) has decided to establish its own standards for air quality. The change was prompted by the recent revisions for air quality standards in the US Navy Manual revision 7 in which carbon monoxide testing was changed and moisture testing was added. Although the Board decided to follow the Navy’s lead and reduce the amount of carbon monoxide allowed to 10 ppm, they decided that there is no reason to test for moisture. Concerns for regulators freezing in cold water situations have already been addressed by the recent switch to Mares Abyss 22 Navy II regulators and our cold water diving is not quite as cold as what the Navy is doing.

The contract with TRI Air has been modified to reflect the new NOAA air quality standards. Approval will be sought from the Director of OMAO in December in the form of a decision memo. Once the Decision Memo is approved the change to the NDSSM will be posted on the NDP website.

NOAA air standards approved by the NOAA Diving Control and Safety Board during their October 2017 meeting.

The NOAA Diving Center will be offering winter NOAA Diver and Divemaster classes in Key West, Florida from January 29 to February 16, 2018. NDC has made an initial assessment of the conditions on the ground at Key West and has decided to go forward with the class as planned. Unfortunately, military lodging will not be available to students, therefore a block of rooms has been reserved at the Key West Double Tree Hotel. The class rate for the hotel is $259 per night (the government per diem for lodging in Key West is $268 in January and $294 in February). 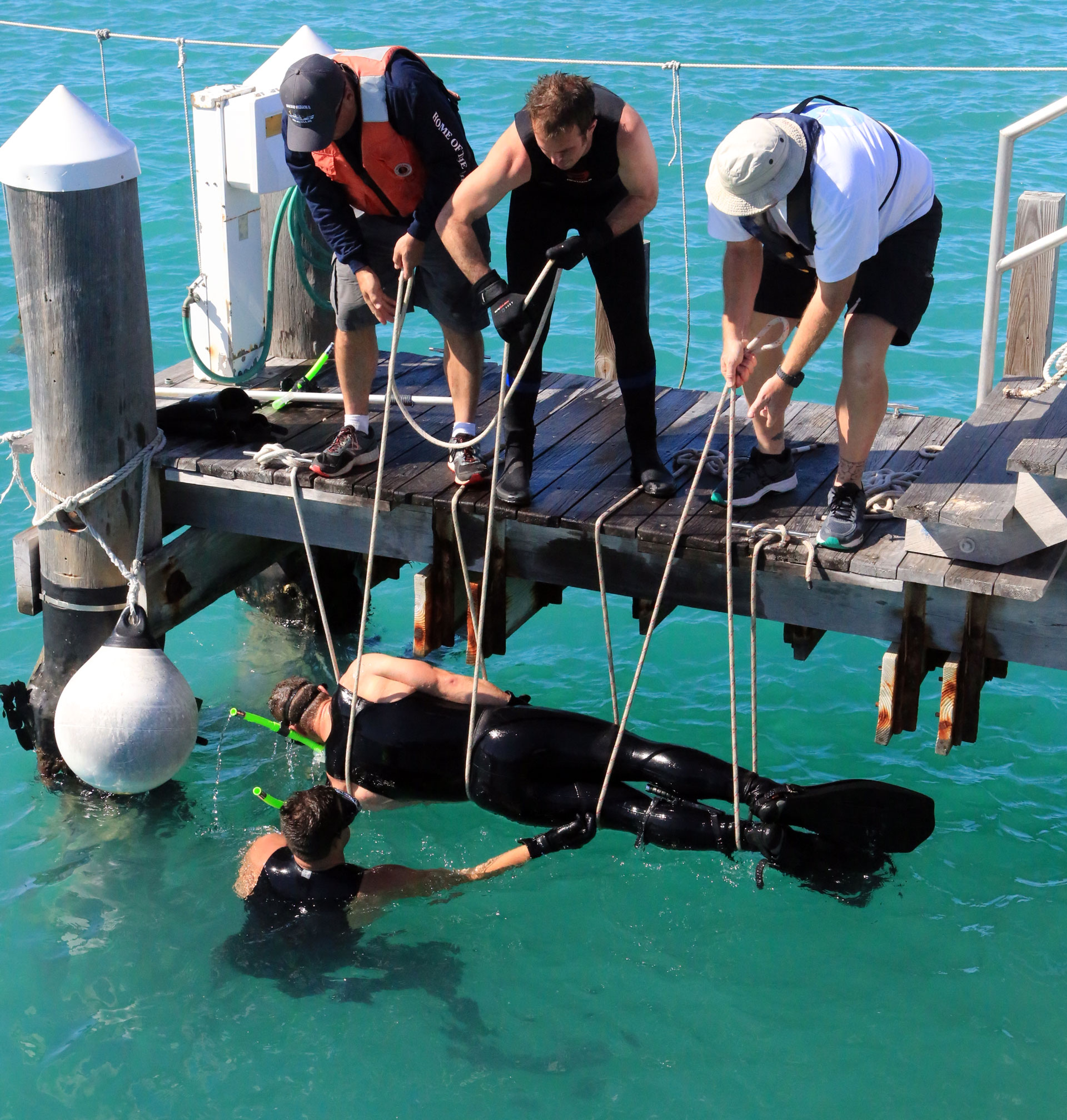 Annual Report forms are due again this year! In order to collect accurate metrics for NDP diving operations, ALL divers should log their dives in the NOAA Dive Management System (NDMS) by December 1, 2017. Unit Diving Supervisors should complete NF 57-03-02 Diving Program Annual Report (please use the form in this link instead of reusing old forms) and turn it in to their Line Office Diving Officers by November 15, 2017. (That’s two weeks from now!) Reports should be accompanied by photos. Remember: the report now encompasses the calendar year, not the fiscal year. If you have any projects planned in November and December, please add them in the appropriate areas. You can always attach more information if needed on a separate page.

Government leaders in and outside of NOAA have praised the report in recent years, and we want to continue to provide the public and government officials with the best information on how diving at NOAA improves the health and prosperity of the nation. Tying your mission to agency mandates in your narratives and adding photos of your projects help tell this important story.

On October 19, 2017 the University of Hawai’i’s (UH) Hyperbaric Treatment Center (HTC) temporarily suspended operations (read more about this announcement here). Unfortunately this leaves the state of Hawai’i without a hyperbaric treatment center. The NDCSB is discussing potential alternatives to support NOAA divers in Hawai’i. A similar problem arose last year in Alaska, where there is also currently no hyperbaric chamber support. Divers needing hyperbaric treatment in Alaska currently need to be evacuated by air to Seattle, Washington, where the closest chamber is located.

The NDCSB voted this month to appoint Ben Haskell as the interim Unit Diving Supervisor (UDS) for Stellwagen Bank National Marine Sanctuary (SBNMS) while a new UDS is identified. Former SBNMS UDS Matt Lawrence transferred at the beginning of October to Florida Keys National Marine Sanctuary (FKNMS) and will now be working from Key Largo. Matt had been the UDS at SBNMS since April 2015. Congratulations on your new job Matt!

Diving Safety Officer Roger Mays is working to develop a new Diving Unit Safety Assessment (DUSA) checklist. His proposed changes to the current checklist will be discussed during the next NDCSB meeting.

The next NDCSB meeting is scheduled to take place on November 15. Please contact support.ndc@noaa.gov if you are interested in listening to the meeting.

Photos and Stories of your Diving Projects

Tell us about your diving experiences in the field! Please send any photos, videos, and project summaries to aitana.delajara@noaa.gov for inclusion in this newsletter, the NDP website, and/or the NDP Facebook page. 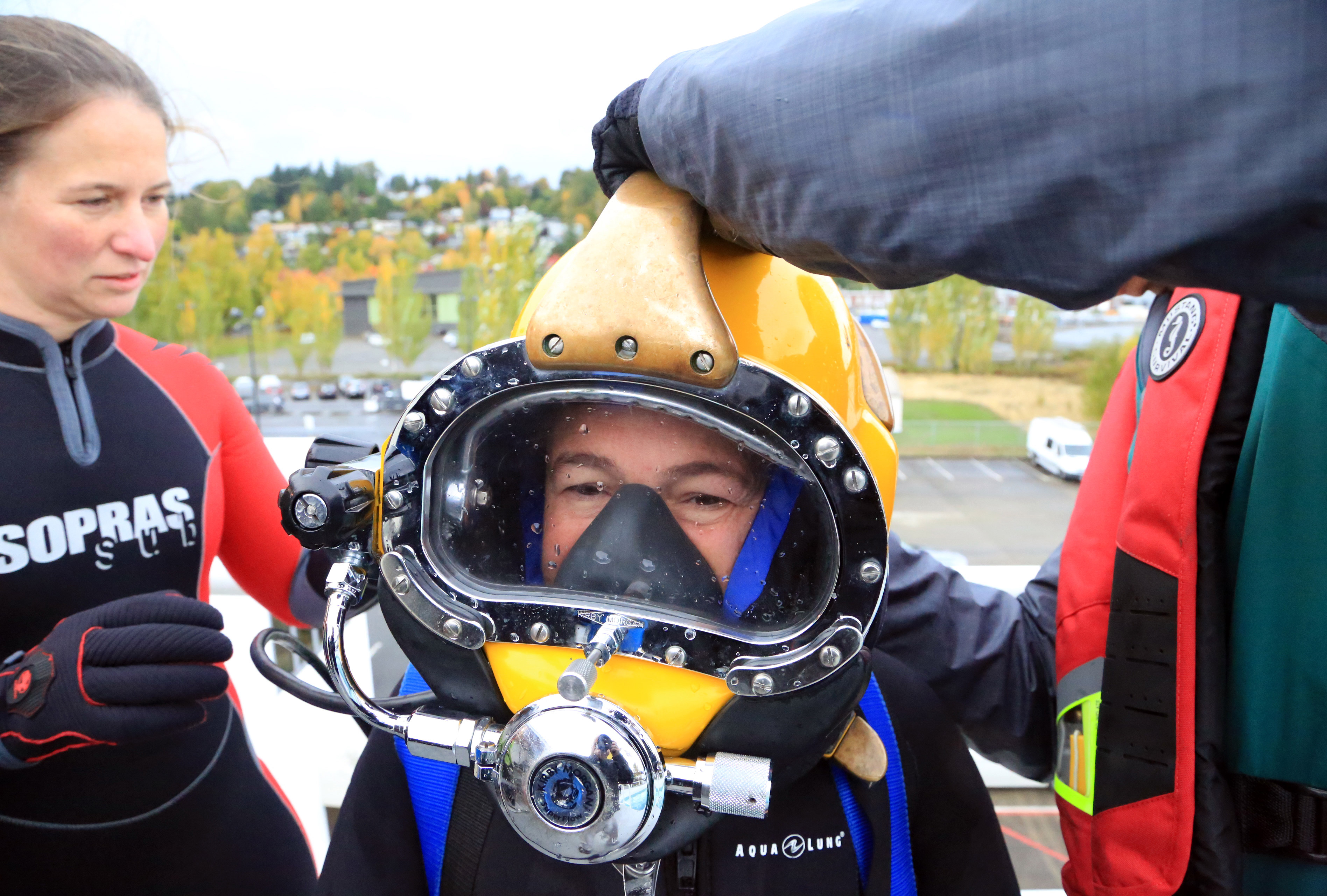 The new Diving Medical Officer for the NOAA Ship Hi'ialakai, Lt. Cmdr. Kathy Demers, gets hatted with a surface supplied diving helmet during the Physicians Training in Diving Medicine course. The Physicians course is a collaboration between NOAA and the Undersea and Hyperbaric Medical Society.