On January 9, NDCSB Chair Ray Boland sent a safety bulletin to all divers describing recent issues with SEP-issued Mares and Atomic SS1 regulators. The safety bulletin required all UDSs to review the issues and NDCSB-provided procedures and reporting guidelines with unit divers by February 9 and/or during the annual unit reviews. Since then, Line Office Diving Officers have confirmed that active units have reviewed the information with their divers.

The NOAA Diving Program has been in touch with Mares and Atomic to remediate the issues. After extensive research, testing, and communication with the manufacturers, the NDCSB has determined:

in March The little elves that work behind the scenes to assist divers with the DMS and other NDC issues have decided to take a well-deserved break. This means that during the month of March, divers will not be able to obtain assistance through the support.ndc@noaa.gov e-mail account. E-mails sent there will be attended to in April in the order in which they were received. If you need immediate assistance with a DMS issue, please contact your UDS or LODO.

The new NOAA Dive Log, which will be replacing the NOAA Dive Management System (NDMS) and will function on all internet browsers, is targeted to release by May. The focus of this release is to maintain current functionality with few updates. However, some noticeable improvements will include: An expanded section for diving certifications and Special Task Endorsements, and greater access for UDSs.

The NDCSB has rescheduled its Annual Meeting to April 9-13 in Key West, Florida. The meeting was moved from a prior date in February. The new date will allow for planning and communication with units regarding agenda topics. If you have a suggestion for the meeting agenda, please send it to your UDS. UDSs should forward the topics to their LODOs as soon as possible.

On January 24, Rear Admiral Tim Gallaudet, Ph.D., U.S.N. Ret. visited the NOAA Diving Center to meet with leadership, see the Seattle training facility, and discuss NDC’s mission. Dr. Gallaudet is the current Assistant Secretary of Commerce for Oceans and Atmosphere and, during his visit, he expressed his enthusiasm and support for the NOAA Diving Program. He and his wife Caren are active recreational divers and have recently completed training through the NOAA Diving Program to become NOAA Observer Divers. They plan to exercise their observer diver status at many of the National Marine Sanctuaries! 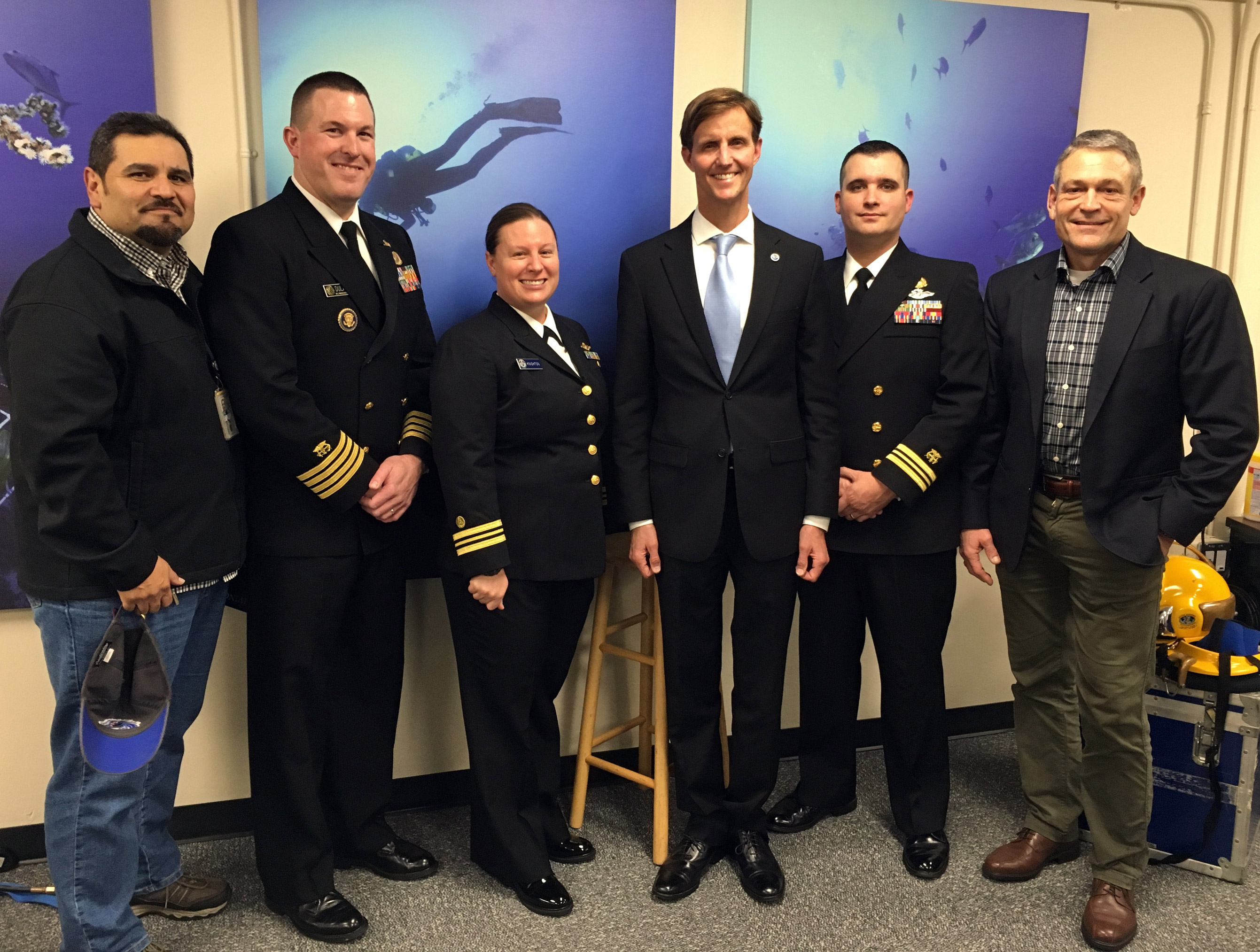 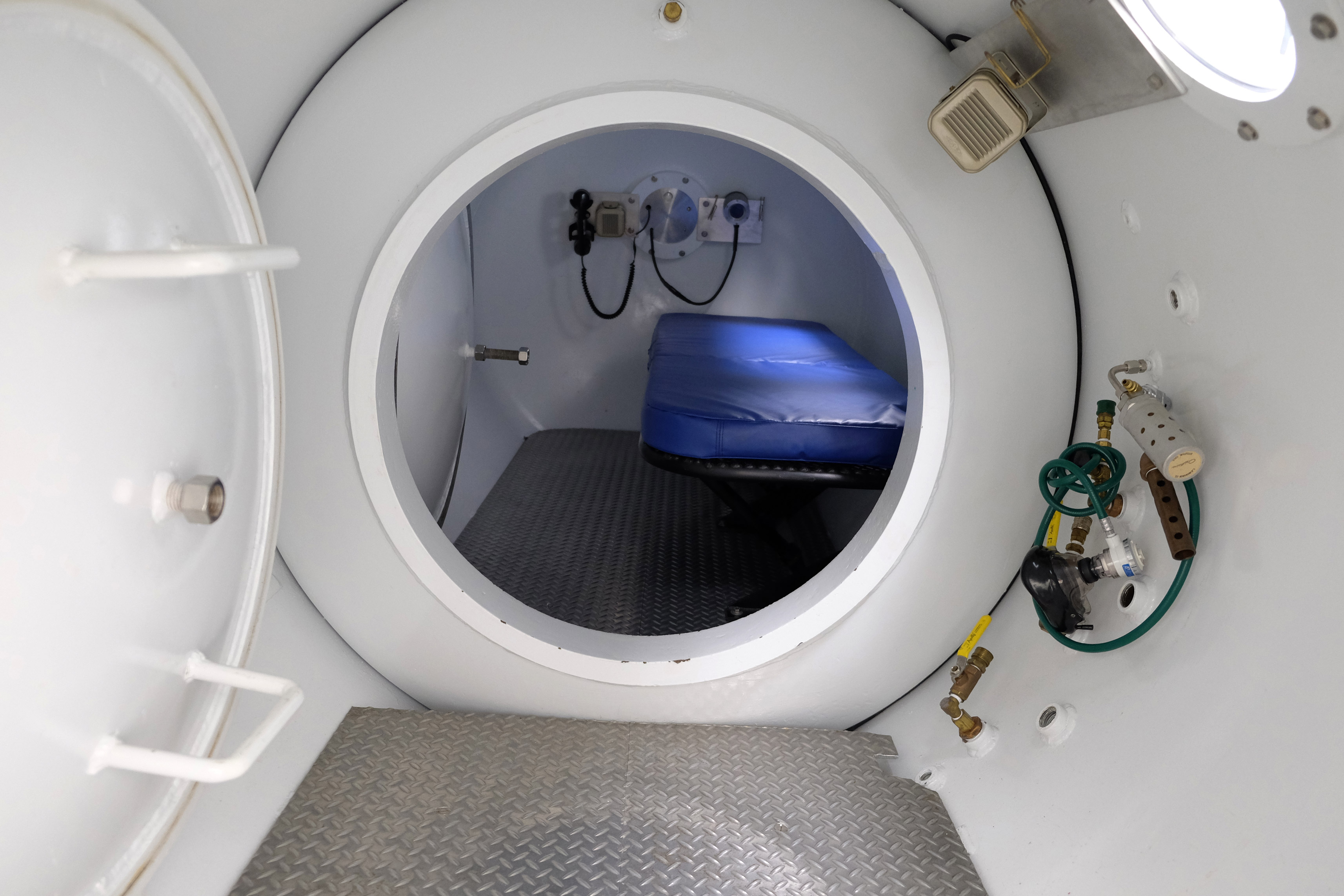 A view inside the new containerized hyperbaric chamber which was refurbished by the NOAA Diving Center.

The use of CCRs and technical diving continues to expand at NOAA. The National Marine Fisheries Service’s units in Southern California have trained two CCR divers to support research on endangered abalone species. The Papahānaumokuākea Marine National Monument divers, who have been using CCRs for many years, are now crossing over from using the Megalodon rebreathers with which NDP started the rebreather program, to the Poseidon Se7en rebreathers recently approved for use by the NDCSB. These new rebreathers will allow the divers to conduct deep dives with a lighter and more agile rig.

In addition, various units are using the new “tech lite” decompression procedures that were outlined for the first time in the NOAA Diving Standards and Safety Manual released in April 2017. The procedures allow divers to conduct decompression dives on open circuit SCUBA gear without mission-specific pre-approval by the NDCSB when conducting dives no deeper than 150 feet. Units currently taking advantage of this program include Thunder Bay National Marine Sanctuary, Monitor National Marine Sanctuary, and Papahānaumokuākea Marine National Monument.

NDC completed the winter NOAA Diver and Divemaster classes in Key West, Florida with 18 NOAA Divers and 11 Divemasters graduating. This year, NDC also offered a Visual Cylinder Inspection class in January and a Tethered Communications class in February, both also in Key West. Congratulations to all the students that completed their training! 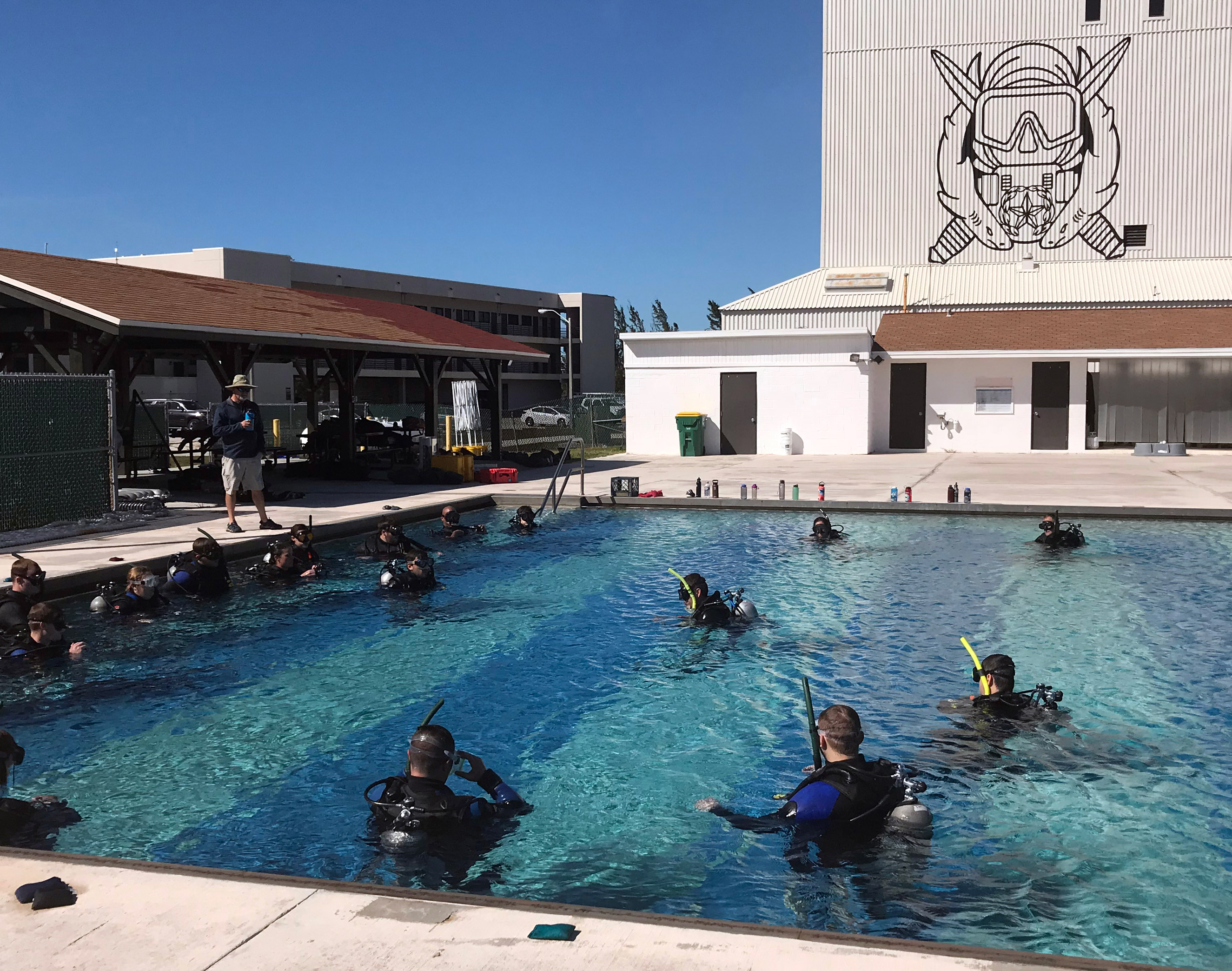 The first day of the NOAA Diver open circuit SCUBA instruction at the US Army Special Forces Unit in Key West, Florida.

NDC is now gearing up for these upcoming classes:

In addition, NDC instructors will be supporting the Reef Assessment and Monitoring Program (RAMP) mission aboard NOAA Ship Hi’ialakai, working as Divemasters and hyperbaric Chamber Supervisors from March 15-June 20, 2018.

A photograph from last year’s RAMP mission was featured as one of NOAA’s “Postcards from the Field”. It was great to see the NOAA Diving Program featured in a NOAA outreach e-mail. NDP was able to get this mission featured thanks to Andrew Gray, who generously shared his photographs last year. NDP posted one of his images on the NDP website, where NOAA personnel picked it out as this month’s feature! So, please keep sending in your photographs from the field – NDP needs to show the world the variety of diving and work that takes place in NOAA! 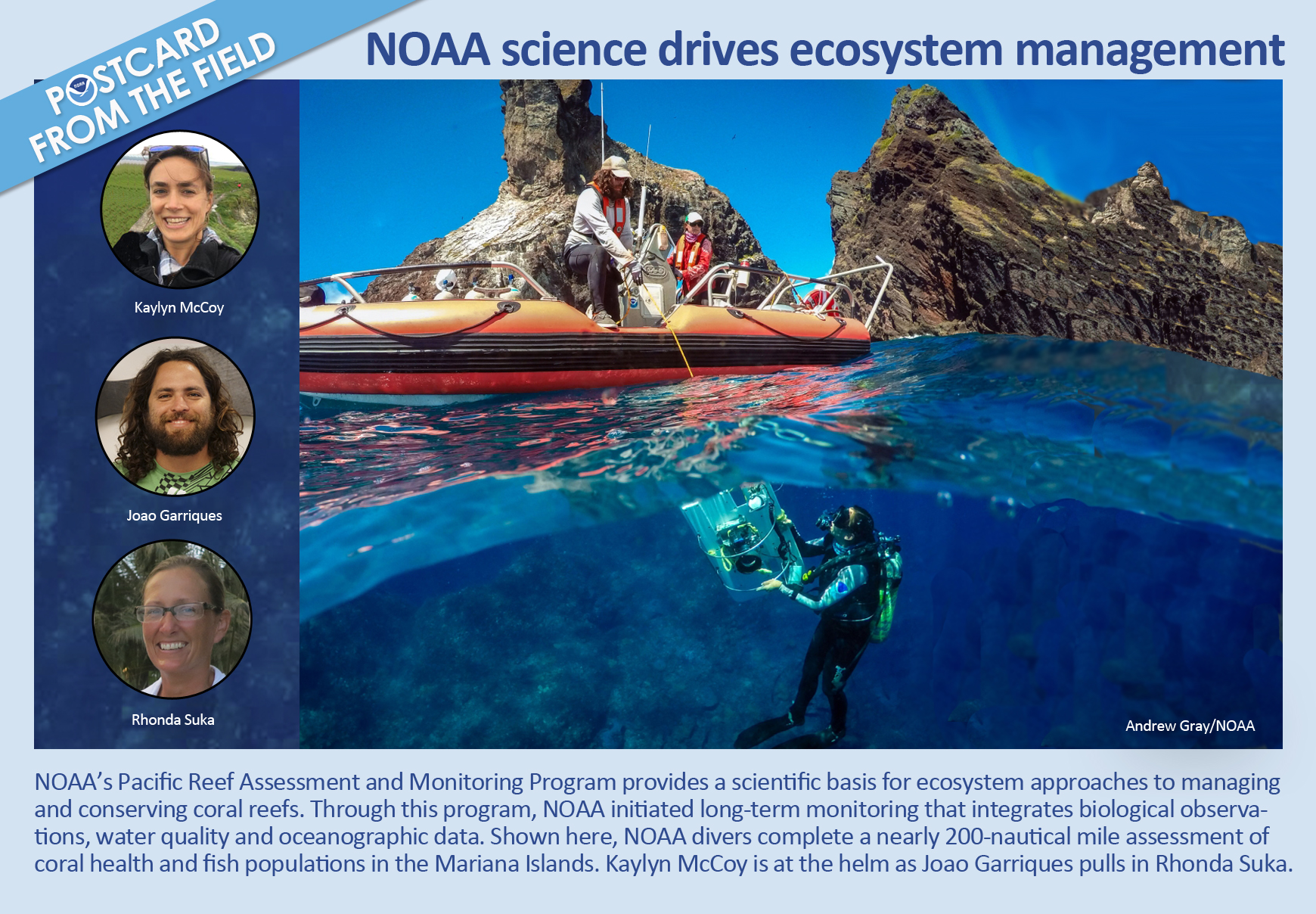 NOAA Diving Program operations were featured in one of NOAA's "postcards from the field" on February 20, 2018. The postcard highlighted work performed by the Pacific Reef Assessment and Monitoring Program.

The next NDCSB meeting is scheduled for March 15, 2018. If you are interested in listening to the meeting please contact Ray.Boland@noaa.gov for connection information.

A snapshot from the Field

Ship divers do a lot of hard, unsung diving, including routine and emergency hull maintenance dives. NDP recognizes their hard work which saves NOAA significant amounts of money and time. In this photo, ENS Nicole Chappelle and ST Shane Mallory prepare for a hull maintenance dive on NOAA Ship Hi’ialakai. 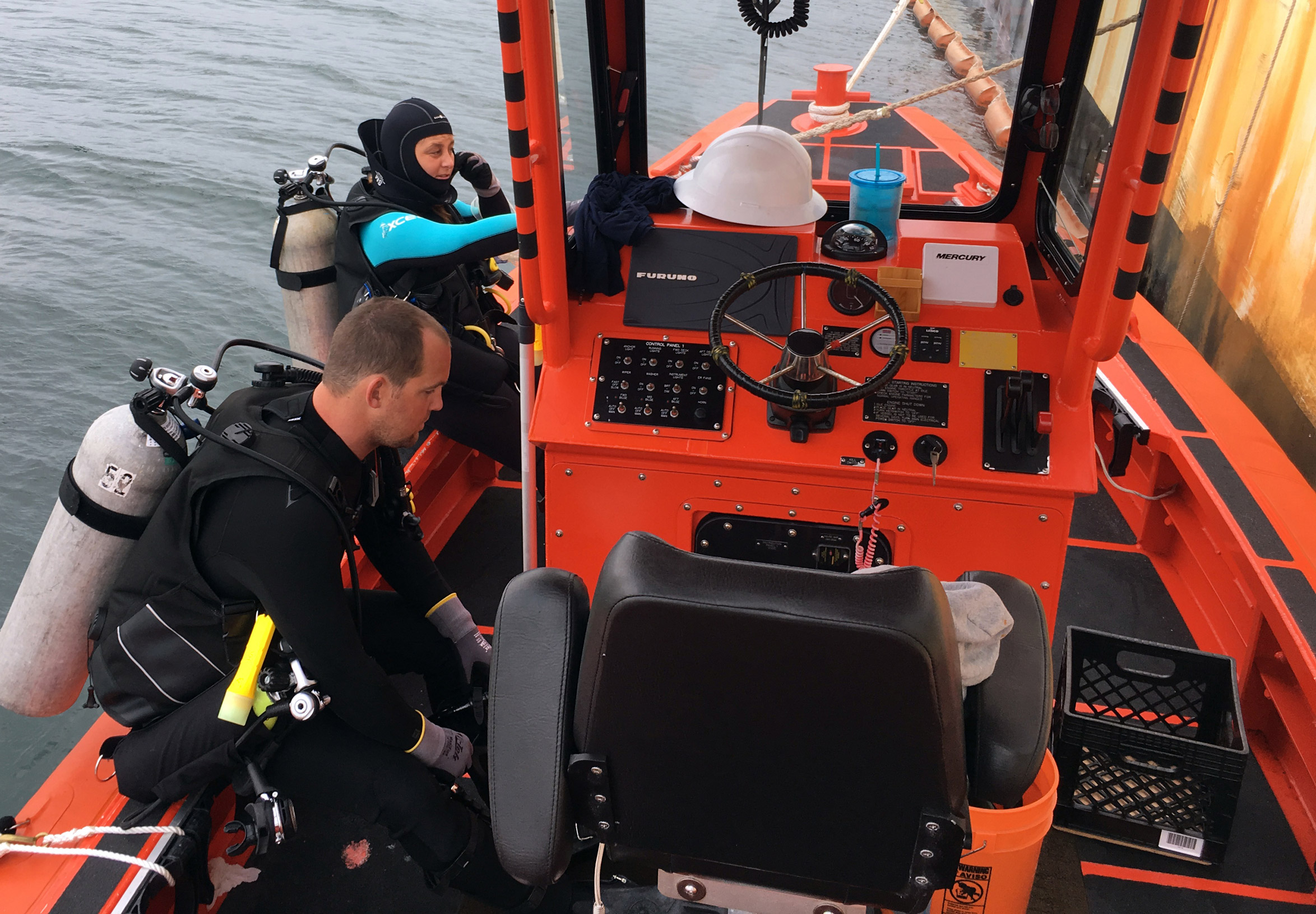