Survey Technician Sophia Tigges is seen here removing barnacles from oceanographic sensors that were attached to a moored buoy.

In this article, we hear from Sophia Tigges, a survey technician aboard NOAA Ship Ronald H. Brown. As a survey technician she is tasked with the responsibility of ensuring the functionality and operational efficiency of all scientific data collection equipment aboard the ship. In her own words, she shares her journey from a young, budding science enthusiast to joining The Nation’s leading federal scientific agency. Enjoy!

My love of science began at a very young age and, as a result of the nurturing I received from family and teachers, it blossomed into the amazing career I have today. I remember collecting moss and insect samples from my grandparents’ backyard to examine under their old laboratory microscope. At the encouragement of my teachers, I later participated in extracurricular activities like the Science Olympiad and my school’s robotics team. Through all of these avenues, I was fully immersed in the world of biology, physics, engineering, and geology where my creativity and curiosity further grew.

I continued on this multidisciplinary path as I enrolled in Massachusetts Institute of Technology and joined the earth, atmospheric, and planetary sciences degree program. Although my coursework involved oceanographic topics, I didn’t give much thought to the ocean until I was quite literally in the middle of it. A poster of a seagoing tall ship in a hallway on campus piqued my interest and I applied to a semester-long program in sailing and oceanography. At the time, I could not have fathomed how that decision would shape my career. During the program, I stood both scientific watches and deck watches with the other students. I was thrilled by the combination of sail handling, navigating, and collecting biological, chemical, and physical oceanographic data. Something inside me just clicked, and I knew that I had found a home at sea.

After graduating in February of 2018 with a Bachelor of Science in Earth, atmospheric, and planetary sciences, I set out on a quest to learn how I could make my passion my paycheck. I began working on tall ships as an educator, deckhand, and program coordinator to teach lessons in marine and environmental sciences. I had the opportunity to work with people of all ages to catch and examine plankton, explore the impact of ocean acidification, and discuss the issue of microplastics. My own experience at sea had been so significant to me that I wanted to contribute to others’ learning in the same way.

At the time I had a friend who worked aboard a NOAA fisheries vessel that introduced me to the NOAA fleet. When I heard about the role of a survey technician, I knew that the position would be a great fit for me. I started out in 2020 as a hydrographic assistant survey technician aboard NOAA Ship Thomas Jefferson. NOAA’s hydrographic ships are specially equipped to collect high resolution bathymetric data that is foundational for all ocean-related fields. From aiding in safe marine navigation to evaluating the health of delicate marine ecosystems, I was excited to see the diverse applications of this data firsthand.

During my first field season with NOAA, I was given the opportunity to see this data at work through two vastly different missions. The first project was located in the offshore Chesapeake region and its focus was providing depth measurements that were to be used by the NOAA Office of Coast Survey to update nautical charts to ensure safe navigation. On the second project, we coordinated with Flower Garden Banks National Marine Sanctuary and the Bureau of Ocean Energy Management to survey reef structures in the Gulf of Mexico. 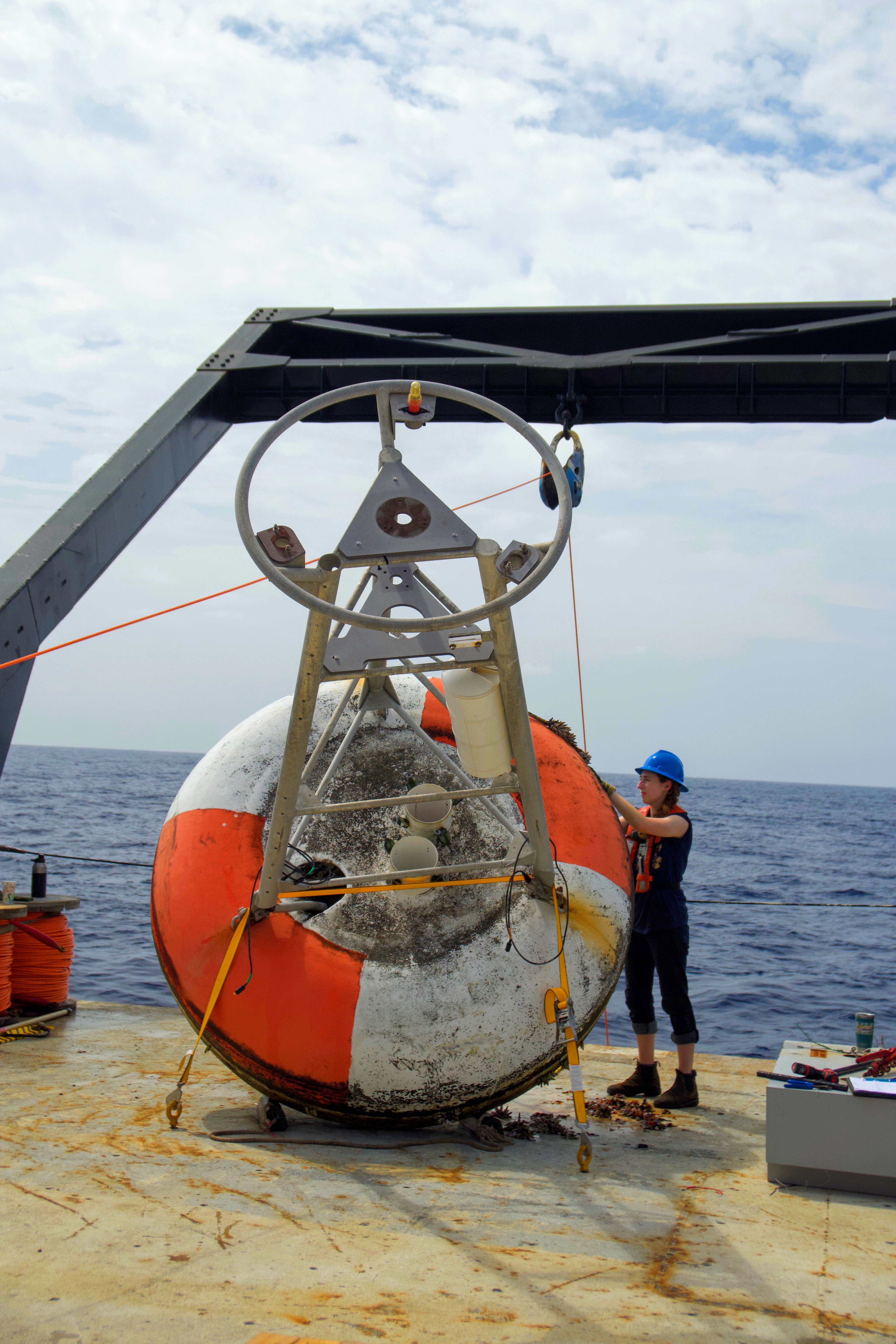 Survey Technician Sophia Tigges aboard NOAA Ship Ronald H. Brown removing gooseneck barnacles that have made their home on the bottom of a buoy.

Currently, I work as a survey technician aboard NOAA Ship Ronald H. Brown, I am part of a small team that is responsible for ensuring the functionality of the ship’s sensors and data collection systems. My daily tasks consist of monitoring the equipment and the data from the oceanographic and meteorological instruments to ensure that they are all functioning properly. Additionally, I perform regular maintenance to care for the ship’s scientific systems so that they can continue to make accurate observations to longstanding datasets. During missions, I work alongside teams of scientists to facilitate the use of the ship’s technology for their research projects. Finally, at the conclusion of the mission I ensure the data’s submission to NOAA’s National Centers for Environmental Information where the information is archived online for public access.

During my first experience aboard a NOAA ship I discovered that my favorite aspect of my position was performing daily hands-on scientific fieldwork and my second tour at sea didn’t disappoint. Since arriving aboard NOAA Ship Ronald H. Brown my first mission was the PIRATA Northeast Extension cruise. We collaborated with scientists from NOAA’s Atlantic Oceanographic and Meteorological Laboratory and Pacific Marine Environmental Laboratory to conduct CTD casts and to service moored buoys in the eastern Atlantic Ocean. The ship’s oceanographic and atmospheric observations, coupled with the observations made by the PIRATA buoy network, will be used to better understand ocean-atmosphere variability in the tropical Atlantic region.

I will never take for granted the variety of experiences that I am afforded as a survey technician. To have the chance to support so many different scientific fields is unique, and I appreciate that no operational day looks exactly the same. I am also thankful that the oceanographic, bathymetric, and atmospheric observations from NOAA ships are used by scientists around the world. To be able to see the tangible impact of your work make a difference in the lives of everyday people is an extremely rewarding feeling. The ocean connects us all, and as a survey technician in the NOAA fleet, I am humbled to be a small part of that connection.

You are here: https://www.omao.noaa.gov/find/media/articles/2021-03-31/meet-crew-survey-technician-sophia-tigges-noaa-ship-ronald-h-brown
Reviewed: March 31, 2021. Contact us with page issues.