ENS Adler grew up on Long Island. She went to Bucknell University to study Environmental Science and received her Bachelor of Science degree in 2002. In her spring semester of 2001, she circumnavigated the planet onboard the S.S. Universe Explorer through the University of Pittsburgh’s Semester at Sea program. ENS Adler attended the University of Wyoming and wrote a masters thesis on her laboratory studies of NH 3 and HNO 3 volatilization from sublimating ice. She received her MS degree in December 2004. After spending 2 ½ years in the beautiful Rockies, she is thrilled to return to the coast and begin her career in the NOAA Corps. She looks forward to this next adventure and hopes to join the Hydrographic Survey and Remote Sensing Teams. She has always spent most of her free time at the shore, and enjoys riding horses and sculpting/sketching too.

ENS Arsenault attended the University of New Hampshire where she spent a semester in Botswana studying wildlife ecology and working for a safari company tracking and identifying lions. After graduating in 1998 with a B.S. in Zoology, ENS Arsenault worked as a veterinary technician before becoming a bacteriologist with the infectious disease branch of the Massachusetts Department of Public Health. Finding the laboratory setting too monotonous, ENS Arsenault sought a more versatile career path and discovered the NOAA Corps, which will allow her to pursue a variety of interests with the vast opportunities provided. When not playing with orangutans in the jungles of Sumatra or biking through Eastern Europe, ENS Arsenault can be found snowboarding, horseback riding or sailing.

ENS Brinkley has grown up around various military installations and has traveled extensively from China to Saudi Arabia as a US military dependent. After graduating high school in Heidelberg, Germany, he returned to his native state where he attended the University of Oklahoma. With an undying love for severe weather, he focused his studies outside the classroom and became an avid storm chaser, pursuing the most dangerous tornadoes in the southern plains. Graduating with a Bachelor of Science degree in Meteorology and a minor in Mathematics in 2003, he sought to expand his storm chasing adventures and relocated to Fort Belvoir, Virginia, where he assisted Virginia Emergency Management during the 2004 hurricane season. Now that he has been accepted into the NOAA Commissioned Officer Corps, he is setting his sights on NOAA Aviation as a hurricane hunter.

ENS Christensen is originally from Minnesota but now resides in West Palm Beach, Florida with his wife Tyra and has a child due early in September. He received his Bachelor of Science degree in Commercial Meteorology and a minor in Business from Embry Riddle Aeronautical University in Daytona Beach, Florida. While in Daytona Beach he contributed in the advancement of the Embry Riddle Weather Center. ENS Christensen enjoys severe weather and thrives on working in severe conditions. He also enjoys working with computers and flight. Being this diverse he would love to participate in as many aspects of the NOAA Corps as possible. ENS Christensen plans to work in the NOAA Corps and work on his Masters and Doctoral degrees.

ENS Finney is from Monterey, California. He obtained his B.S. in Earth System and Science Policy with a concentration in Marine and Coastal Ecology from California State University Monterey Bay. Prior to that, he also earned an Associates degree from Denver Automotive Diesel College, and he has been working as an Audi and ASE certified mechanic for the last 8 years and as a crew chief for RPMS Motorsports/Chiron USA. ENS Finney also has prior service having served in the United States Army Reserves. He hopes to one day become a NOAA diver, and he looks forward to long career with the NOAA Corps. In his spare time, ENS Finney likes to scuba dive and race cars.

ENS Ford calls Norfolk, Virginia home. She has a BS in Oceanography from USNA and an MS in Environmental Science from Old Dominion University. For 6 ½ years, she was an Aviation Maintenance Officer in the United States Navy after which she worked in the civilian sector for a number of years. She has a diverse civilian background with work in the environmental, safety, public health, and telecommunications fields. ENS Ford was looking for a job that would combine the challenging work environment and discipline of a uniformed service with the research and discovery aspects of science. She is looking forward to an exciting career in the NOAA Corps.

ENS Jennings grew up in Houston TX. She graduated from the University of Texas in Austin with a degree in zoology. As a part of her studies, she spent six months as an Advanced Intern at the Living Seas at Epcot Center in Orlando Florida. She was thrilled to be one of the aquarium SCUBA divers and to use her NAUI rescue diver certification. During this time she did research involving fish identification. She has lived in Boston for the past two years and has enjoyed watching the Red Sox and the Patriots become world champions. She and her husband, Andy, are excited to move with the NOAA Corps and see what adventures await them. ENS Jennings hopes to work on a fisheries or an oceanography boat. She sees this commission as the perfect opportunity to blend her passion of marine science, her concern for environmental issues, and a desire for public service.

ENS Lewis is a 2002 graduate from California State University of Monterey Bay receiving a B.S in Marine Science with an emphasis in Marine Mammals. While obtaining her college degree, ENS Lewis had the amazing opportunity to work with a non-profit research group based out of Moss Landing Marine Laboratories known as the SLEWTHS (Science Learning and Exploration With The Help of Sea Lions) Project. During her 5 years with SLEWTHS, ENS Lewis became a senior marine mammal trainer and was involved with an exciting array of research endeavors. She largely credits her love and inspiration for further research of the marine environment to her mentors and peers at SLEWTHS. Prior to accepting a commission within the NOAA Corps., ENS Lewis worked as a marine mammalogist at the Oregon Coast Aquarium were she was fortunate to work with a variety of marine mammals, and explore SCUBA diving on a regular basis. ENS Lewis is anticipating her first sea assignment and enthusiastic about beginning a career at sea.

ENS Martin is from Edmond, Oklahoma. She received her B.S. from the University of Florida in May 2004. During college she worked as a SCUBA Instructor in the Caribbean and the west coast of Florida. She did an internship with the South Carolina Coastal Conservation League in Charleston, South Carolina where she learned about the NOAA Corps. After graduation she worked for BASF Corporation in Research Triangle Park, North Carolina. ENS Martin is an avid rugby player and has just started learning how to snowboard.

ENS Saxe, a native of Rochester, NY, graduated in May 2004 with a BS in Biology from the George Washington University. During his stay at GW ENS Saxe chose to augment his studies with a sailing program from Sea Education Association. This hybrid program involved both oceanography and seamanship components, allowing ENS Saxe to study the distribution of euthecosomates in the equatorial pacific as well as learn how to bring a vessel safely and swiftly across 4,000 miles of open ocean. It was this experience with SEA that led to ENS Saxe’s first employment aboard the Pride of Baltimore 2 as a deckhand. After living and sailing aboard a tall ship ENS Saxe is ready to start a career on the water as part of BOTC 107.

ENS Smidansky grew up in Bozeman, Montana. He graduated from Penn State in December 2004 with a BS in Meteorology and a minor in Engineering Mechanics. His reasons for joining the NOAA Corps include a desire to serve the United States, an interest in aviation and marine operations, and the prospect of involvement in interdisciplinary work. ENS Smidansky is a commercially licensed, instrument rated pilot and a SCUBA diver. He enjoys flying, traveling, and camping with his wife, Heidi. Additional hobbies include photography, snowboarding/skiing, and fly-fishing. ENS Smidansky hopes to become involved in NOAA aircraft operations.

ENS Strausz grew up on a farm near the small rural town of Mabton, Washington. During high school he worked on the family farm in the summers. After high school, he went to Western Washington University for two years and then transferred to Washington State University to pursue a degree in Biological Systems Engineering. During his last summer vacation, ENS Strausz worked for the Idaho Department of Environmental Quality and conducted a ground water study. After graduating in 2001, ENS Strausz got a job with his alma mater at their Irrigated Agriculture Research and Extension Center (IAREC) in Prosser, Washington. At IAREC he worked as an engineering technician in irrigation and tree fruit research. Looking for a new career path, ENS Strausz was excited to discover the NOAA Corps. In his spare time, ENS Strausz likes to get outdoors and work on his old cars. He also has interests in photography and computers.

Led by her interests in oceanography and meteorology, ENS Waddington began her NOAA career as a volunteer researcher assisting with open sea studies aboard NOAA vessels Albatross IV and Delaware II. Upon high-school graduation, ENS Waddington chose the San Jose State University Meteorology program as a compromise to pursue her main interest in ocean-atmosphere interactions, specifically in hurricane development. During her junior and senior years at SJSU, ENS Waddington was hired as a student intern for the National Weather Service in Monterey, California. She further developed her understanding of both the atmospheric and oceanic genres by obtaining her advanced SCUBA certification and by acting as a “human dropsonde” through sky diving. ENS Waddington’s dream is to become a crewmember of NOAA’s Hurricane Hunters.

ENS Wasser is from Columbia, Maryland. He graduated from St. Mary’s College of Maryland in 2001 with a degree in mathematics. He completed a project in boat design and construction, sparking a greater interest in the water. After graduation, he worked on a variety of traditionally rigged schooners, sailing the waters between Key West, FL and Lunenburg, Nova Scotia. During and after college, he traveled to Australia, Europe, and the Middle East. ENS Wasser is looking forward to his first sea assignment and is hoping to work with a variety of NOAA’s endeavors. His hobbies include reading, traveling, skiing, and hiking. 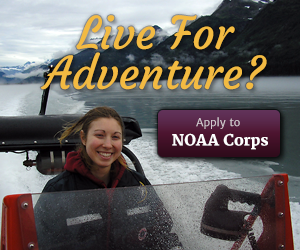 You are here: https://www.omao.noaa.gov/learn/noaa-corps/about/class-rosters/botc-107
Reviewed: December 23, 2015. Contact us with page issues.