ENS Jason Appler earned his bachelor's degree in Biology from Villanova University in 1993, while working in the medical field conducting CD4/CD8 testing for AIDS patients. He also completed a North Eastern University program in Marine Mammal Studies in 1991. Preferring a marine oriented environment, he went on to do fieldwork in the Alaskan area of the Northwest fisheries, where he continued to work at sea for several years. It was there, while working for the National Marine Fisheries Service, that he learned about career opportunities with the NOAA Corps. ENS Appler has been assigned to NOAA Ship David Starr Jordan.

ENS Kurt Dreflak graduated from the University of California at Davis in 1994 with a B.S. in Geology. Since then, he has worked as an environmental consultant for Inter Island Environmental Services in Honolulu, Hawaii. ENS Dreflak has been assigned to NOAA Ship Delaware II.

Originally from Salem, New Jersey, ENS DeHart holds a B.S. degree in Mechanical Engineering from Purdue University. Over the past few years, she has worked as an environmental and engineering consultant performing commercial property assessments, sampling and remediation. ENS DeHart has been assigned to NOAA Ship Whiting.

ENS Brian Goodwin recently received dual degrees in biology and Marine/Environmental Science from Salisbury State University and University of Maryland Eastern Shore respectively. During his college career, Ensign Goodwin conducted research on Maryland's Coastal Bays and presented his findings at the National Conference of Undergraduate Research in Rochester, NY. ENS Goodwin has been assigned to the NOAA Ship Rude.

ENS Jennifer Hickey grew up in Seattle and received a B.S. in Biology with a minor in writing from the University of Puget Sound in 1987. For the past 12 years she has worked for a series of biomedical research companies in disciplines including radiochemistry, immunoassay development, analytical chemistry, and in vitro drug metabolism. ENS Hickey has been assigned to NOAA Ship Miller Freeman.

In May of 1999, ENS Angie Messer graduated from Texas A&M in Galveston with a B.S. in Oceanography. While attending Texas A&M, Ensign Messer was awarded the National Collegiate Natural Science Award. ENS Messer has been assigned to the NOAA Ship Rainier.

ENS Kristie Twining graduated from Long Island University in 1994 with a B.S. in Marine Biology. For the past 5 years she has been living in Alaska working in the area of fisheries biology. She has been employed on various commercial and sport fishing vessels throughout Alaska and has worked at remote salmon hatcheries in Prince William Sound. She received a 100-Ton U.S. Coast Guard License and is an entry level Diesel Engine Mechanic. ENS Twining has been assigned to NOAA Ship Rainier.

ENS Kevin Werner graduated from the University of Washington in 1996 with degrees in atmospheric sciences and mathematics. He then went on to graduate school and obtained an M.S. in atmospheric sciences, also from the University of Washington. His research has focussed on climate variability in the tropical Atlantic Ocean. ENS Werner has been assigned to NOAA Ship Ka'imimoana. 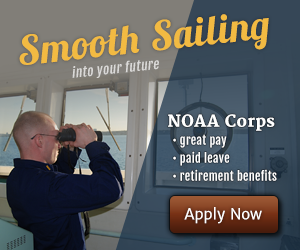 You are here: https://www.omao.noaa.gov/learn/noaa-corps/about/class-rosters/botc-97
Reviewed: December 23, 2015. Contact us with page issues.