In January 2021, U.S. Coast Guard officer Lt. j.g. Rebecca Edmonds, found herself in an unusual situation for a Coast Guard member: serving as an officer of the deck aboard a National Oceanic and Atmospheric Administration (NOAA) ship.

In the 72nd year of the California Cooperative Oceanic Fisheries Investigations (CalCOFI), the San Diego-based NOAA Ship Reuben Lasker, one of NOAA’s five fisheries survey vessels, was short-handed due to the COVID-19 pandemic. While the ship’s complement of NOAA Commmissioned Officer Corps (NOAA Corps) officers and civilian professional mariners were prepared to sail under strict COVID-19 protocols, scientists from a partner organization were unable to join the science party from the NOAA Southwest Fisheries Science Center aboard the Lasker for the CalCOFI survey.

Thanks to the partnership between NOAA and the Coast Guard and some special circumstances, Edmonds was available to help the Lasker team.

“My ship, the U.S. Coast Guard Cutter Mellon, was decommissioned in August 2020, so my junior officer peers and I had the opportunity to visit other units so long as they had a rack for us. Since we weren’t going underway on the Mellon anymore, we had the chance to pursue other career interests," Edmonds said.

Edmonds, who graduated from the Coast Guard Academy in 2019 with a degree in marine environmental science, knew exactly who she wanted to approach about a temporary position: NOAA.

While attending the Academy, Edmonds learned about NOAA and its uniformed service, the NOAA Corps, from her navigation instructors, who were themselves NOAA Corps officers. Passionate about marine science, the more she learned about the agency and how it used scientific methods to study the ocean, the more interested she became.

“Since the ocean is so vast and we can’t breathe underwater, it takes a lot more work to understand the processes and changes taking place beneath the surface. I am interested in marine science because we just don’t know enough about the ocean. We need to know more! It’s too big of a risk not to. So many people rely on it for their livelihoods,” Edmonds said.

Following the Mellon’s decommissioning, Edmonds went down a list of NOAA ships in hopes of joining a team of the agency’s crewmembers and scientists. Her search brought her to the Reuben Lasker and its commanding officer, Lt. Cmdr. Jonathan Heesch. Her timing was perfect.

Heesch was immediately impressed with Edmonds’ qualifications, passion and commitment to learning about the scientific aspects of ocean management. Soon thereafter, he offered her the chance to join the ship’s crew and participate in their next survey, a decades-long study of the sardine population in the California Current.

“Due to COVID-19, our science party was unable to fully staff their group, so this was a win-win for everyone, including Lt. j.g. Edmonds, Reuben Lasker and the scientific complement,” Heesch said.

This special arrangement was made possible by an officer exchange agreement that NOAA and the Coast Guard signed in 2014 that allows the exchange of officers for the purpose of sharing professional knowledge, expertise, doctrine and for the professional development of officers.

As a junior officer of the deck, Edmonds adapted quickly to undertake multiple tasks in a short amount of time. Her duties included handling ship safety and navigation and working with the onboard scientists to collect and analyze specimens from the ocean.

“When I was helping the scientists, I did whatever I could to make the sample collection and processing go more smoothly and quickly,” Edmonds said. “I collected water samples containing salt, chlorophyll and nutrients and analyzed chlorophyll samples using a fluorometer—a device used to measure the light signatures of various objects. I also collected preserved plankton samples from net tows to measure the volume and genetic material that was left behind.” 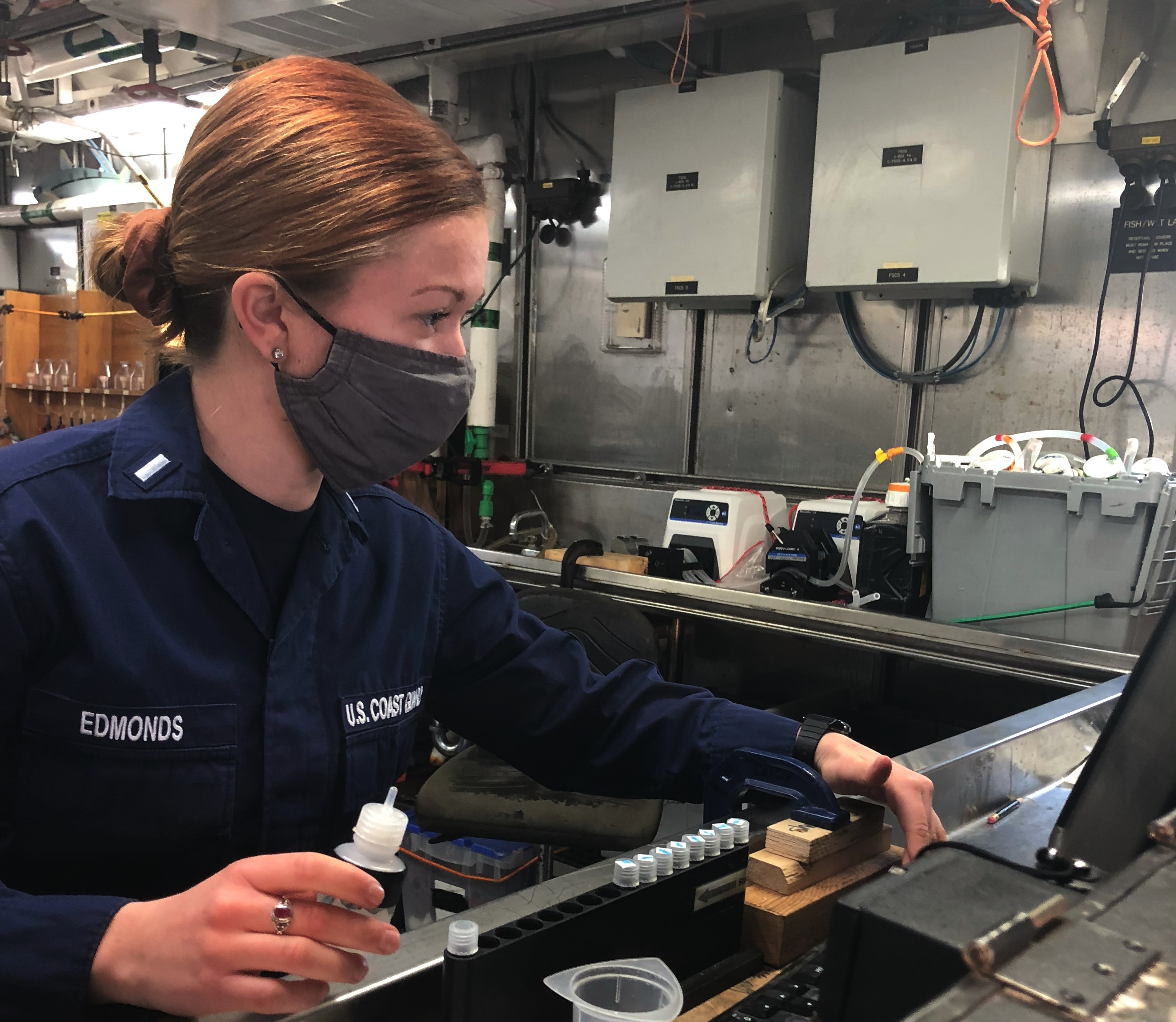 The new experience also posed challenges for Edmonds, who was used to serving as a deck watch officer aboard a Coast Guard cutter rather than on a research vessel with a different configuration, protocols, culture and mix of commissioned officers, civilian mariners and scientists.

“My biggest challenge was learning the ship-specific information for watchstanding and ship handling during operations,” Edmonds said.

Despite these and other challenges, her efforts aboard the Lasker earned her the qualification of underway officer of the deck and praise from Heesch. She also won the trust and confidence of the CalCOFI cruise’s chief scientist, Amy Hayes of NOAA’s Southwest Fisheries Science Center, who was skeptical at first about the unusual staffing arrangement.

“I thought it would equate to more work for our team in showcasing what the CalCOFI program is and how our data supports NOAA's mission of sustainable fisheries,” said Hayes. “Well, I was more than proven wrong when Lt. j.g. Edmonds introduced herself to me. She made a huge difference in the amount of quality data that we could collect, fit right in with our group, and was a tremendous asset to our CalCOFI survey.”

Having completed her temporary assignment aboard the Reuben Lasker, Edmonds is now the executive officer of the Coast Guard Cutter John McCormick—a fast response cutter designed to patrol coastal regions—where she will be participating in fisheries law enforcement and search and rescue operations.

She takes with her the experience she gained aboard the Lasker and credits the ship's crew with providing the kind of education that comes from being underway with a diverse team.

“Working alongside NOAA Corps officers, NOAA civilian professional mariners and scientists was a special experience because there was a top-notch atmosphere of seamanship and teamwork,” Edmonds said. “I think part of the reason for that atmosphere on board the Reuben Lasker is because the crew is comprised of people with such diverse backgrounds, so everyone has a fresh perspective to bring to the table. I had a lot of memorable conversations about their experiences in the commercial maritime and scientific world, which will help me with interactions as a Coast Guard officer and as a scientist.”

She also found the Lasker’s officers to be very welcoming to their new shipmate.

“I think another reason for the atmosphere on board is the healthy command climate,” Edmonds said. “I admire each member of the wardroom for being so inclusive and really learned a lot from them.”

The NOAA team learned much from Edmonds as well.

“Lt. j.g. Edmonds' seemingly unending curiosity and commitment to learning was impressive and truly appreciated,” said Heesch. “She helped my wardroom and crew grow and added tangible assistance to the science party."

You are here: https://www.omao.noaa.gov/find/media/articles/2021-07-21/us-coast-guard-officer-joins-noaa-ship-reuben-lasker-survey-california-current
Reviewed: July 21, 2021. Contact us with page issues.